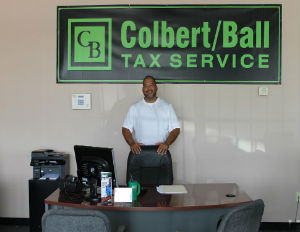 When it comes to franchise concepts, one would be hard put to find one owned and created by an African American. It’s harder still to find one that’s been in business for 20 years and thriving.

Look no further than Colbert Ball, the fourth largest tax service in the United States.

Colbert Ball was created in 1995 by Al Colbert and Jaja Ball. The cousins came up with the concept while in college and haven’t looked back since. Today they have more than 300 locations across 23 states and is one of just a handful of African American-owned franchises recognized by the International Franchise Association.

It’s tough to argue with the appeal of owning a tax service franchise. Most of the work is handled four months a year and affords franchisees the opportunity to spend more time with friends and family. But it takes hard work, dedication to craft, and trust for people to bring you their tax documents and leave their personal information at your mercy.

Just ask Sean and Shannon Verdun, owners of a Colbert Ball franchise in Fort Worth, Dallas. The couple are a Colbert Ball ultra-success story and living proof that the system works.

They both retired from their high-salaried information technology corporate jobs before the age of 40 and can now focus on their kids and helping people in their community.

Sean Verdun tells BlackEnterprise.com he feels extremely fortunate to be part of a winning franchise, one with a world class support team. They opened their first office in 2007 and over the past seven years have had no regrets.

Before they started their franchise, the Verduns, who both have master’s degrees in IT and bachelor’s in business administration, had been helping out friends and family with their taxes. They never dreamed it would lead to them doing tax returns for thousands of people and help them net hundreds of thousands of dollars each year.

Verdun says, “The bottom line was we really understood the concept of preparing income taxes. The concept was brought to our attention by a family member. We were really excited when we heard they were one of the largest black owned franchises in the country.”

Learning that the franchise was an African American-owned concept spurred them into action. The more research they did, the more intrigued and enamored they became with the idea of getting on board.