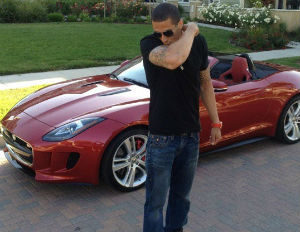 According to Pro Football Talk, the endorsements are beginning to roll in for star NFL quarterback Colin Kaepernick.

Sport icons of today like Blake Griffin, Peyton Manning and Kevin Durant are all the face of a particular product, and Kaepernick joined that club as well late last week. Colin agreed to an endorsement deal with Jaguar. The deal went public this past Wednesday.

When Kaepernick was the backup quarterback to Alex Smith, there was always speculation of the young man not being marketable because of his visible tattoos. Now, a veteran in his third year in the NFL, he proved all those wrong who speculated he wouldn’t be a marketable sportsmen.

After making his endorsement deal public, Kaepernick also tweeted a picture of him in front of his new maroon convertible. Kaepernick’s new car has a price tag of $92,000. Like the other sports stars that are the face of a product, Kaepernick will be in a commercial promoting a new product from Jaguar soon.