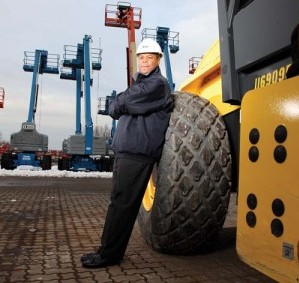 When a recruiter contacted William B. Plummer about a CFO position at United Rentals, Plummer admits he knew little about the equipment rental company and even less about the industry. “I had to ramp up and educate myself pretty quickly,â€ says the MIT and Stanford graduate. What he found impelled him to pursue the opportunity.

“It was a company well positioned in its industry–the largest in revenue, the largest in fleet size, having the greatest number of branches, and just the broadest presence overall. There’s a lot of opportunity for this organization to lead,â€Â  he says.

Plummer also believed that he had the talent and experience to help get them there. As chief financial officer of Dow Jones & Co., the leader in business news and financial information, he had set policy for global finance and corporate strategy. And as vice president and treasurer of Alcoa Inc., the leading aluminum producer, his responsibilities included managing relationships with commercial and investment banks. Aside from the business potential, Plummer was most interested in working for United’s president and CEO, Michael J. Kneeland, who was looking not only for a financial expert but a business strategist.

It wasn’t long after Plummer accepted the position of CFO in 2008 that he and the management team had to steer the company through one of the worst recessions in U.S. history. Through an overarching initiative called Operation United, they focused on a major corporate restructuring of the 14-year-old company to grow customer segments, realign processes, and revamp compensation programs and operating systems. In the last two years, Plummer has been able to slash costs across the business by $500 million. At press time, United Rentals reported fourth quarter revenues of $597 million, up from $557 million for the fourth quarter in 2009, surpassing analysts’ expectations by more than $22 million. Here Plummer discusses what collaborative leadership looks like and how it drives business success.

What was CEO Michael Kneeland looking for when he hired you?
Michael had a vision to be the clear, undisputed leader of the industry. He wanted someone who could help drive that thought process and find initiatives to be much more profitable. He was looking for a partner, and that was very attractive to me. I’ve done a lot of things in my career that have positioned me to be a strong partner in deciding strategy, direction, and key initiatives in a corporation.

What are the benefits of collaborative leadership?
Obviously, Michael is the CEO but to the extent that you can fit together two people or more who have strengths that complement each other, then you will get a better result across the corporation. That’s why it works well between Michael and me. He’s got long experience in the industry. He’s got long experience in this company. He knows the people. He knows the product. And he’s got a good sense of the organization’s limitations. [My] experience is in managing capital structure. Managing and dealing with investors is something I’ve brought to the table.

How do you avoid it being an awkward dance?
The key is managing the integration of those strengths and doing it in a way that doesn’t provoke conflict. Mike and I work very well together. There’s not a lot of ego conflict. If you look at circumstances at other companies where people try to leverage each other’s strengths, very often it degenerates into an ego battle and one person says, ‘Hey, I’ve got to dominate the situation’ and the other person is saying, ‘I got a better idea,’ and it devolves into a battle.

You both also share the same strategies in managing through crisis.
It’s a vital part of what we’ve been able to do. We certainly get dragged into the fire of the moment but you can’t just go in and do, do, do, based on what drops on your desk during the course of the day. You’ve got to be able to push back andÂ  say, ‘Where are we going, what are the set of objectives we need to be focused on, and how do we support those over the longer haul?’ As a finance person, I’ve been trained by an economic way of thinking: The economists would say you’ve always got to be thinking about the future. You’ve always got to ask yourself: ‘How can I drive better performance over time?’ The nature of business is to balance the things you need to deal with today against where you’re headed and how you’re going to get there in the future. Mike has a very similar point of view.Â  I think it’s one of the reasons we sync up so nicely. You’ve got to force yourself to always look down the road even as you’re dealing with what’s going on today.Â