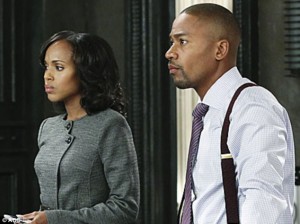 A man was hospitalized as the result of allegedly being involved in the fight on March 15.

TMZ says Short was out celebrating an engagement at Gabe’s Bar and Grill in Los Angeles, when “another partygoer made a comment to the actor about his wife.” Short purportedly punched the man, leaving him unconscious and with a broken nose. TMZ reports cops are now conducting a criminal investigation.

The Huffington Post say it’s not the first time Short has been in trouble:

This is not the first time Short has been accused of a physical altercation. In 2010, he was accused of breaking the jaw of a man named Jason Hill during a pick-up basketball game. Hill ultimately got a restraining order against Short, TMZ later reported.

The 31-year old actor, who plays Harrison Wright in the hit TV series, is now being investigated by Los Angeles police for criminal battery, according to TMZ.

The 31-year-old is best known for playing Harrison Wright in the hit ABC series. He has also had roles in “Death at a Funeral,” “Cadillac Records,” “Stomp the Yard” and “You Got Served.” He was also a dancer for Britney Spears and reportedly had a brief fling with the pop star.

The Mail Online said Short has had problems with his personal life as well:

Last year, his second wife Tannee McCall filed for divorce amid rumors that she was having an extramarital affair with one of his friends.

He too has admitted to infidelity during his marriage to first wife Brandi, after having a brief fling with Britney Spears in 2003 when he worked as her back-up dancer, who was eight months pregnant at the time.

Short returned for the third series of the ABC political drama with Kerry Washington, Scott Foley and Tony Goldwyn.

Some viewers have already joked the character of the show’s star, Kerry Washington, should handle this.