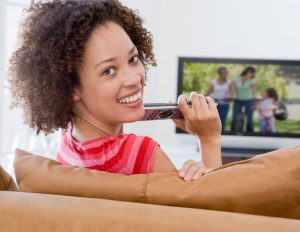 As part of its Black Film & TV destination, Comcast Xfinity on-demand will include a section called ‘Black Women Behind the Scenes’ that puts a spotlight on directing, producing, writing, costuming, and even risking life-and-limb as stunt women behind the scenes of popular TV and film productions. The cable network has captured intimate one-on-one conversations with talented women like Gina Prince-Bythewood, Susan Fales-Hill, Effie Brown, Kay Oyegun, LaFaye Baker, Quinta Brunson, and Franchesca Ramsey, to name a few. Also weighing in are a few men like Prentice Penny, David E. Talbert, Malcom D. Lee, and Reggie Rock-Bythewood.

In addition, network partners participated too, capturing conversations with women behind the camera, such as Tasha Smith and D’Angela Proctor for TV One; Zola Mashariki and Connie Orlando for BET; and Terri J. Vaughn for Aspire and Lucy Chodota for The Africa Channel, to name a few. All of these women will share insider perspectives, reflections, and personal stories of triumph.

“There’s something about seeing someone who looks like you doing extraordinary things that’s just inspiring,” says Keesha Boyd, executive director of Multicultural Products and Consumer Services, Comcast Cable in TV. She cites a Nielsen study, Young, Connected and Black, that showed over 60% of black millennials agree that it feels really good to see stars in media who share their ethnic background.

In a recent blog post, she recounts sitting down with my family to watch Eyes on the Prize, the documentary about the Civil Rights Movement from 1954-1985, and how important it was to her parents to have access to educational, historical TV content during her formative years. “Making sure content like that has a home is part of what makes my job meaningful. With that intent, our team launched a new permanent collection in the ‘Black Film & TV’ destination of Xfinity on-demand, called Black History Always On,” she writes.

This collection tells the stories we need to hear and includes more than 100 titles of content including historical documentaries, biographical films, Comcast’s original Voices of the Civil Rights Movement profiles, specials from networks like Smithsonian Channel and much more, she goes on to say.

Boyd also announced Comcast’s support of independent black film making, by partnering with the American Black Film Festival and BlackStar Film Festival to launch a special collection through its Streampix on-demand service, which is licensing short and feature length films and webisodes from alumni filmmakers, who’ve screened their work at past festivals.

“With these new partnerships, we’re using the power of our Xfinity on-demand platform to invest in the black film making community and showcase the work of these talented filmmakers to an even broader audience,â€ she states.