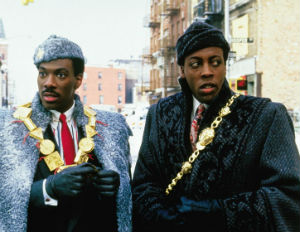 Can you believe that it has been 25 years since Coming To America hit the big screen?

With such a milestone, the former co-stars Eddie Murphy and Arsenio Hall discussed the possibility of a Coming to America sequel. While visiting The Arsenio Hall Show, Murphy recalled the backlash that occurred after the film’s initial debut.

He remembers several lawsuits and even a confrontation with someone in a club claiming that he was the prince.

“There was some dude who was claiming he was the prince. I be out in the club and this African dude would roll up on me and say, ‘I am the real prince! You stole my life from me! And I want my money! I’ll kill you!â€