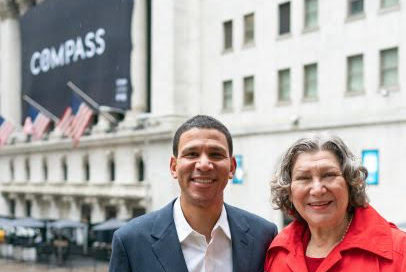 Robert Reffkin is projected to become America’s youngest Black billionaire. If you are unfamiliar with him, now is a prime time to learn a few tidbits about Compass Inc. ‘s Chief Executive Officer and cofounder of a technology-focused brokerage. Compass Inc. was co-founded in 2012 by Reffkin. Ori Allon, another entrepreneur, is the other founder.

According to Compass’s website, Reffkin is on a mission to help everyone find their place in the world. He earned his B.A. and M.B.A. from Columbia University. Compass’s headquarters are located in New York, although real estate markets are served nationwide.

Bloomberg reported that Reffkin raised $450 million in an initial public offering (IPO) of the company on Wednesday.  Bloomberg also said stated the sale was cut in half from the company’s prior target as tech shares sank this week. It supposedly priced at the low end of a reduced range with investor enthusiasm waning for high-flying startups that received a boost from Covid-related demand, according to Bloomberg.

Although Reffkin’s high-profile career travels have included career stops at McKinsey & Co., the White House, and Goldman Sachs Group Inc., Bloomberg said that it was a real estate startup that vaulted him to an ultrarich status. Bloomberg also stated that Reffkin must show that his investments in technology talent can justify Compass’s valuation; the company has yet to turn a profit.

Fintecology further reported that when Compass started trading on the New York Stock Exchange, the company reportedly priced its initial public offering at $18 a share yesterday. In conjunction, Fintecology stated that the firm’s valuation is now $7 billion. While reporting, Fintecology added that although the IPO raised about $450 million for Compass, which is less than half of what it had previously sought, it will place Reffkin as having one of the largest fortunes amassed by any executive in the real estate industry over the past decade.

“According to an analysis by Insider, the IPO could put Robert Reffkin, the 41-year old cofounder of Compass, on the path to earning more than $1 billion. That total comes from adding together stock awards he has been granted by the company, other stock promised to him if the shares meet ambitious prearranged pricing targets, and awards that will vest over time,” Fintecology reported. “If Reffkin is able to collect all of the shares, it would make him only the eighth Black billionaire in America — and the youngest.”

On Reffkin’s LinkedIn account, he explained why he started his booming company in the first place. He also tagged someone special named Ruth in a post he shared yesterday.

“I started Compass because of my mom, Ruth, a single mom who embodies the entrepreneurial spirit and is now one of Compass’s 19,000+ amazing agents. It was a great honor to have her join me this morning at the NYSE !