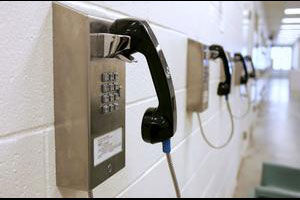 Connecticut became the first state to make phone calls free between the inmates and their families.

Part of a bill sponsored by state Democratic Reps. Josh Elliott and Sen. Martin M. Looney, all forms of communication, whether it be an email or video calls are now free those incarcerated and those who are receiving the communication, according to CNN.

“We’re on the right side of history,” Elliott said. “Corporations can no longer be allowed to exploit the love between incarcerated people and their families – not in our state, not on our watch.”

The bill was signed on Wednesday by Gov. Ned Lamont could go into effect as early as next month or this Friday.

By extension, the bill also includes those in juvenile detention facilities getting free phone access.

The state has a prison contract with phone vendor Securus Technologies, which used to charge $5 for a 15-minute call. With all things considered, the rate of making a prison phone call is one of the highest in the country, according to The Associated Press.

The new bill allows up to 90 minutes of free calling per day.

“Today, Connecticut made history by becoming the first state to make prison calls, and all other communication, free,”  Executive Director of Worth Rises, a prison reform non-profit, Bianca Tylek said. “This historic legislation will change lives: It will keep food on the table for struggling families, children in contact with their parents, and our communities safer.”

Securus Technologies also supports the legislation in a statement, saying, “This important legislation not only provides relief for consumers, but it also is a bellwether for other state and local jurisdictions looking for ways to make these products and services more affordable and more accessible,” the statement said.