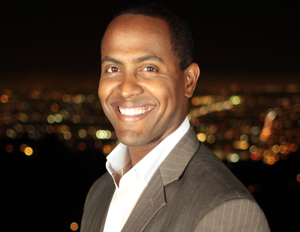 The It Factor: Erdolo Eromo (@Erdolo) is, at 31, one of the country’s youngest leaders in the world of mobile technology. The Ethiopian-born and raised business executive serves as senior vice president of business development and client relations at Payvia, aÂ mobile and online payments company.Â In his role, Eromo oversees the company’s sales strategy in local and international markets. In developing Payvia’s top clients, he works to ensure they expand their markets through the mobile payments landscape.

A Chance Opportunity: After graduating from UCLA, where he played football and earned his undergraduate degree in sociology, Eromo began working at the well-known restaurant chain, Cheesecake Factory. While at the restaurant — on what was supposed to be his night off — he found himself serving the CEO of Payvia. Very impressed by his personality and professionalism, Eromo was told to call that CEO and subsequently was offered a junior position at the company. Just a few years later, he’s now at the helm of the rapidly growing mobile technology industry.

Building an Early Foundation: “Integrity, character, service, and product delivery are very important to me,â€Â  Eromo says. He takes his branding mantras from the 7 Habits of Highly Effective People (Free Press; $15.95)Â by Stephen Covey, and believes that in order to be successful, one must “begin with the end in mindâ€ and “do first things first.â€ While he strives to make smart and logical decisions, Eromo ultimately believes in following his heart. He balances the demands of his career by remaining connected to those closest to him and active in sports, finding time to play basketball four times a week.

Day-to-Day Boss Moves: Before even jumping out of bed to begin his day, Eromo reaches for his cell phone to check the previous day’s numbers. “I live and breathe stats,” he says. After reviewing projections and statistical reports on his phone, he makes his way into the office to catch up on the progress of the sales teams and client service teams. The rest of his day is spent in varied ways, all to ensure the best service and product delivery possible.Â Eromo attributes his position’s coolness to three factors: company culture, value added to society and profitability.Â  “I work with people who are passionate about the product and don’t spend the day looking at the clock. [Mobile technology] can have an imprint on society that can last for generations. And it’s profitable.Â  I’m really blessed to have this position.â€