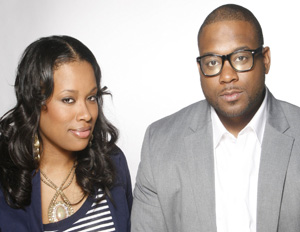 The It Factor: JaQuavis and Ashley Coleman, both 26, are the youngest African American co-authors to make two appearances on the New York Times‘ best-seller list. Tthe couple has co-authored more than 17 best-selling novels and have ghostwritten 15 books for other well-known authors to date. They are now signed to hip-hop label Cash Money’s publishing entity, Cash Money Content. The couple’s newest novel, Murderville: First of a Trilogy (Cash Money Content; $14.95) is the first of a trilogy and is now available in bookstores. Also, the couple says, Cash Money has optioned the film rights to The Cartel trilogy, which will be the first movie in their new movie division. Add to their resume screenwriting and directing. “We just shot and produced our own film, entitled Hard 6. We’re trying to get to the next level.â€

The Defining Moment: Starting at age 17, in their Flint, Michigan high school, the young couple developed their first book. When they met, they discovered they had a mutual love for reading and writing. What started off as a simple writing challenge between the two ended up changing Ashley and JaQuavis’ lives forever. “Ashley would sneak and read my book, and [we figured if] we intertwined our stories, we would have a classic,â€ JaQuavis says. “And that’s exactly what we did. That’s how Dirty Money (2005) was born.â€

The Vision: “[Growing up], we never [really saw] doctors and writers; We looked up to dope boys and fly girls,â€ JaQuavis says. “It was just a reflection of our environment, and that’s why you get the grit and that’s where the inspiration comes from.â€

The Process: “A lot of times, when you’re reading a book by a male author, females can’t relate to the character because a man was trying to imagine how a female would feel about a certain situation,â€ Ashley says. “Co-authoring works great for us because we get to tell two different sides to the same story.â€ JaQuavis explains that being an author is a 24-hour job. “When it comes to writing, Ashley and I are like zombies. We breathe this,â€ JaQuavis says. “It’s like a puzzle, and we both bring certain elements to it. At the end, we have a complete story. We have a unique approach, but it works for us.â€

The Brand: When it comes to the publishing and intellectual industries as a whole, “street” or urban literature can seem like the unwanted step child.Â  Ashley and JaQuavis says that even in urban literature, seeking to be the best of the best is the only option.Â  “I can see how certain books make the street literature genre look bad, but that’s with every genre, Ashley says. “Every genre has cream of the crop writers and writers that are kind of just floating along. In our work, we are the best at what we do. Both of us our college-educated, and we bring intelligence and expertise to our craft. …We’re just giving ourselves to our readers 100%.”

The Partnership: “Honestly, my favorite writer is Ashley,â€ JaQuavis says. “I’m not just saying that because she’s my wife, I’m saying that because she’s an intelligent, very precise and meticulous author, and I appreciate the time she puts into her craft.â€ Ashley also names her husband as her favorite writer. “The things that I’m lacking as author, JaQuavis is so excellent at. I think that’s why we flow so well is because we respect each other’s craft that much.”