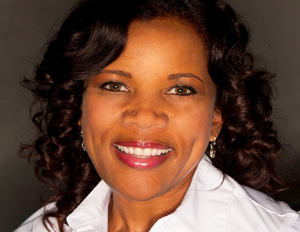 THE IT FACTOR: Katrina Leonce serves as vice president of marketing and PR at Dow Lohnes Sports & Entertainment, a division of law firm Dow Lohnes. Leonce was founder of her own firm, Profiles Public Relations, facilitating creative public relations and marketing strategies for Pro Bowlers and other sports industry greats including Anfernee Hardaway, Jerome Bettis, LaRoi Glover and Orlando Pace.

THE PROCESS: Leonce’s transition into sports happened in an unusual and unexpected way. “I was a paralegal, and I [worked] in law for 13 years. I was living in California and after a divorce, I moved to Atlanta.â€ She got a job writing for a few publications before starting her own called Profiles. While conducting an interview with Terrence Mathis, a former wide receiver with the Atlanta Falcons, she found out he had no representation. “I asked him to have his people send some photos. He said, “What people?â€ From then, Leonce saw an opportunity to become a sports publicist. In two years, she went from having one client to 19.

THE DEFINING MOMENT: Leonce counts her brother, Robert Griffith, a former Minnesota Vikings strong safety, among her clientele, and recalls proud moments in witnessing the advancement of his professional career. “I was driving in Minnesota, and I saw my brother’s billboard— a deal that I negotiated. I knew right then, I was on the right track.”

THE LIFE: Leonce’s job is ever changing. Though she works in a corporate culture, each day presents new challenges and tasks. On Mondays, she gets in very early and begins scheduling her day. “With football season getting ready to start, it’s a busy time for us.â€ She stresses that setting up her schedules on Mondays allows to better plan for the rest of the week.

THE ADVICE: Leonce says newbies in the business should be sure to be knowledgeable and aggressive. “You have to really know the business,â€ she adds.