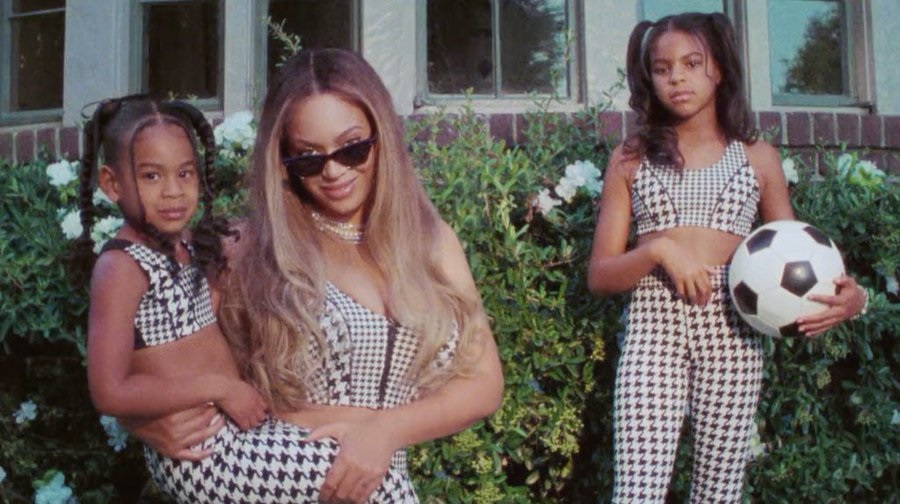 Beyoncé‘s daughters Blue Ivy and Rumi Carter have once again stolen the show with a brief appearance in the ad for the fifth Ivy Park collection, titled Halls of Ivy.

The girls appear together alongside their mother, showcasing the women’s and girls’ versions of the same hounds tooth top and leggings, with Rumi on Beyonce’s hip, and Blue standing to the side bouncing a soccer ball.

A still of the trio has taken social media by storm, with fans stunned at not only how much the girls have grown, but how much they look alike.

Why did I think she was holding Blue Ivy and then I looked and saw Blue standing behind her? Omg. https://t.co/1AKjG8vHNG

Even grandpa Matthew Knowles jumped in on the social media love.

How time flies. I remember like it was yesterday Beyoncé and Solange this age. Singing and dancing all the time. I’m so proud of Beyoncé and what she has accomplished by doing it the right way! pic.twitter.com/SZaTkoncnj

Blue makes a second cameo with her mom alongside Kobe Bryant‘s eldest daughter, Natalia, who is featured throughout the #HALLSOFIVY clip. Deacon and Ava Phillippe also make an appearance, channeling their parents Ryan Phillippe and Reese Witherspoon in their Cruel Intention days with the presentation of the new campaign set on a fictional college or boarding school campus.

According to WomensWearDaily, Beyoncé describes the Halls of Ivy as a “figurative space that is somewhere between where you are now, and where you aspire to be. Described by some as a club, others as a collective, Halls of Ivy is a boundless, unconfined place where everyone is welcome.”

Confirming its goal of inclusivity, the collection—an ongoing partnership between the singer and Adidas— features 89 apparel pieces, 11 accessories and 4 sneakers for adults, as well as 34 kids pieces and one unisex children’s shoe. The unisex adult styles run in sizes XXXS-3XL; the women’s styles include sizes 1X-4X.

“[Halls of Ivy] firmly believes that the power of higher learning can also come from finding your own voice through self-expression, connecting with one another, and sharing space with like-minded people,” Adidas and Ivy Park said in a joint statement. “Our design cues are based on this philosophy and present a collection of classic fashion silhouettes, infused with individual style, swagger, and the spirit of following your wildest dreams.”

Halls of Ivy will be available exclusively through Adidas’ website on Dec. 9, before being released to all retailers the next day.