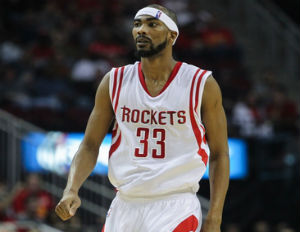 NBA gives the Steal of the Night to Houston Rockets guard Corey Brewer who scored an impressive 17 points in the fourth quarter of Wednesday’s game against the Portland Trail Blazers. Despite Brewer’s efforts, the Rockets still won the game (105-100) and tie for the Western Conference series.

Brewer’s stripping of the ball from Trail Blazers point guard Damian Lillard and fast-break dunk closed the game to only a one-point lead for the Trail Blazers (101-100).

When 29 year-old Brewer was traded to the Rockets in December, SB Nation predicted that the Rockets may be a good home for Brewer, allowing him to showcase his speed and defense off the bench. Â So far those predictions seem to ring true. On March 3, Brewer started, replacing Rockets leading scorer James Harden who was suspended for kicking LeBron James. Brewer was averaging 12 points. He scored a total of 23 points against the Trail Blazers on Wednesday.