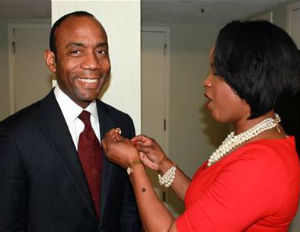 The National Association for the Advancement of Colored People (NAACP) has named New Jersey lawyer and activist Cornell William Brooks as the organization’s 18th president and chief executive officer.

Brooks, a graduate of Yale law school, is the current president and CEO of the New Jersey Institute for Social Justice, and he’s a former lawyer for the Federal Communication Commission and Justice Department.

“I am deeply humbled and honored to be entrusted with the opportunity to lead this powerful historic organization,” Brooks told the AP of his new role. “In our fight to ensure voting rights, economic equality, health equality, and ending racial discrimination for all people, there is indeed much work to be done.”

Brooks, 53, will replace interim leader Lorraine Miller, who has held the position since Ben Jealous’ 2013 departure.