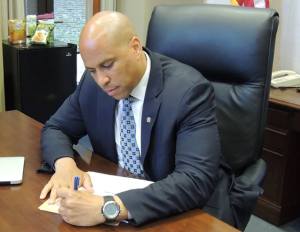 According to reports, Sen. Cory Booker (D-N.J.) has introduced a bill called the Securing Assistance for Victim Empowerment (SAVE) Act, which will disallow major professional sports leagues from claiming status as tax-exempt nonprofits.

With the recent troubles hitting the NFL lately, there are major concerns regarding domestic violence, particularly with the Ray Rice and Adrian Peterson incidents. Rice was suspended indefinitely for knocking out his wife in an Atlantic City elevator and Peterson is unable to play due to child abuse charges levied against him.

A similar bill has been presented in the past but was unable to pick up any notable steam in order to bring it to a vote. Under the tax code, N.F.L. teams pay taxes, but the league office does not and hasn’t since the 1960s.

Booker’s bill would apply to the 10 sports leagues and organizations that have annual revenue over $10 million that claim the exemption. Major League Baseball and the N.B.A. do not claim it, so they wouldn’t be affected.