How This Couple Created Jean Line For Women With Curves 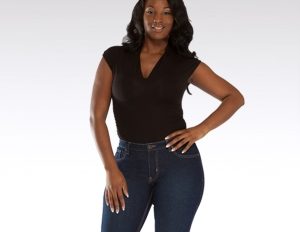 PZI Jeans is a denim line for curvy (not necessarily plus-size) women age 25 and older. It was launched in 2002 by the husband and wife team, Daniel C. Jason and Claire Jason. PZI Jeans is sold online and through its distribution center. “We sell and ship to customers from our 15,000 square foot warehouse facility in Tucker, Georgia, which also houses a boutique called The Denim Suite,’ says Claire.

“In The Denim Suite, we have denim specialists that will talk to the woman, see how edgy she is or how conservative she may be, measure her for the perfect fit, and give her the jeans,â€ adds Claire. Wine is also served in the Suite. “Once that woman comes out of the dressing room, she’s like ‘Wow, that was an amazing fit experience.’â€

All About That Bass

Initially, their interest in jeans came about as the result of an association and investment in a denim line for juniors.Â After that relationship ended, the couple formed another company to develop their own line of jeans to fill what they saw as a void in the marketplace, explains Daniel, president and CEO of PZI.

“During market research and a meeting with department stores, it became very clear to me that curvy women were in dire need of a trend conscious line of denim,” says Daniel. Indeed, their motto, “Design denim for the woman with more in the hips and rear with no gap at the waistâ€ has set their brand apart. The skinny jean was their inaugural design, and now PZI Jeans are available in a variety of styles, including straight, high waist, and various colors and washes, and come in sizes 4—18, offering multiple inseams for shape and height.

Over $13.7 million worth of jeans are sold each year in the U.S., with the size of the denim market for women topping $8.5 billion, reports Statistic Brain Research. On average, a woman has seven pairs of denim pants in her closet. Daniel points out that some of PZI’s jeans are produced in the same factories as some of the other “higher pricedâ€ jeans and sometimes with the same fabric. “While we price our denim to within the $69 — $89 range, others are priced in the hundreds.â€ There will be that one or two occasional seasonal pair of PZI Jeans priced in the $129 ranges. A number of brands are making an impact with luxury denim priced above $300.

Sizing Up The Market

While they started out with a $250,000 line of credit for a bank to cover manufacturing costs, the Jasons continue to practice law (Claire is actually a judge in DeKalb County in Georgia), to self-finance operations and expansion costs. The couple has dressed the likes of Mary Mary, the Braxton sisters, and cast members of Love & Hip Hop in PZI Jeans.

The Jasons are shipping anywhere from 22,000 to 40,000 pairs of jeans each month. “We go from concept to reality, meaning that we design all the products that we sell,â€ adds Daniel. The jeans are manufactured mostly overseas (China, Hong Kong, Canada, and Mexico). Annual revenue is in excess of $1.2 million, a range that’s greatly diminished from the prior years in the face of a downturn in the denim industry, Daniel says. “A lot of denim lines have gone out of business and we’re still trying to streamline.â€