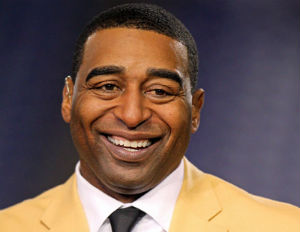 While covering the latest in sports news as an ESPN anchor,Â Carter has been known to candidly interject his opinions on controversial subjects, like Adrian Peterson’s corporal punishment ordeal. Carter, who also played for the Vikings, admitted that his single mother did her best to raise him and his siblings but often “whooped” them as a measure of discipline. “This is the 21st century; my mom was wrong… And I promise my kids I won’t teach that mess to them. You can’t beat a kid to make them do what you want them to do,” he said as he grew emotional.

Fans don’t always agree with Carter’s passion, but it is a strong contributor to his success as a commentator in professional sports.Â Seth Markman, the ESPN executive in charge of the NFL studio shows, said, “The passion he spoke with and the overall message will be something I remember for a very long time.”

Carter is equally successful, and enthused, in his other endeavors as an entrepreneur. In 2000, he partnered with brother John to form Carter Brothers, LLC, to which he serves as Chairman. The venture is already an $81 million fire, life safety and security company, serving clients nationally through relationships with blue chip corporations. His leadership skills have landed the company multiple honors, including the first National Urban League “Entrepreneurship of the Year” award.

Not one to hold back his success jewels, Carter advised his fellow NFL players, “…you should not go into the league and look at it as when I’m done playing, that’s it, I’m retired.Â I don’t care how much money you make, because you could have a great career – if you’re really, really lucky – and that career could end when you are just 38, 39 or 40.” He also emphasized the importance of education, especially for injured athletes: “…because if you’re injured, you can still limp into a classroom, limp into an office building for a job, limp and still wear a suit.”

What are you most looking forward to learning from Cris Carter at the Entrepreneurs Summit? Share with us below or on Twitter, @BlackEnterprise, using the hash tag #SoundOff.