Curators of the Night 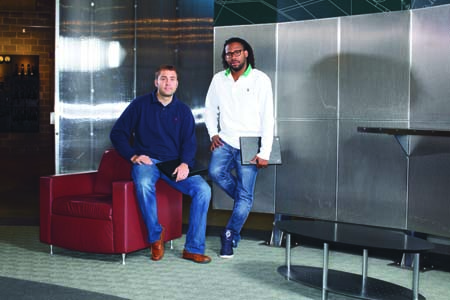 No strangers to nightclub ownership, business partners William Jenkins and Stephen LaMontagne Jr. were looking for a way to promote their new club when they stumbled upon daily deal app service Poggled (www.poggled.com). As the prior owners of Cush Lounge in Milwaukee, which was destroyed by a fire in 2010, Jenkins and LaMontagne were looking for an innovative way to advertise their newest venture, Ivy Lounge.

“We wanted a different way to get brand awareness for our new club,â€ says Jenkins. “Poggled came up during a Google search for options, so we decided to give it a try.â€ Jenkins contacted the service–a daily deals app that attracts clientele to nightlife establishments–and started offering a $120 bottle service package deal, valued at $250, on designated days of the week.

“We went with the product that has the highest markup and it’s worked out really well,â€ says Jenkins, who hasn’t tracked specific revenues resulting from Poggled, but has picked up a respectable level of both new and repeat business from the site, which takes a margin on the deals instead of charging upfront fees. “Anytime you can promote your brand and attract new customers without writing a check, it’s great for business,â€ he says.

Poggled co-founders Joe Matthews and Sean Strother, both 30, launched their firm in 2009 and now have 30 employees. The service, which is available on iPhone and Android smartphones, has become the Groupon version of nightlife. Its owners–high school friends who both attended Northwestern University for graduate school–altered their original business model and, with investors, were able to raise $5.6 million at a $33 million pre-valuation.

“The investors said, ‘Look, you need to do what Groupon is doing, but in the nightlife space because Groupon can’t do nightlife,’â€ recalls Strother. “There’s a totally different subscriber, to Groupon’s list, and many of its functions don’t work well for nightlife.â€

The pair heeded that advice and spent the majority of 2009 figuring out the right way to sell deals in the nightlife space. This was the first step toward establishing their stake in the rapidly maturing daily deals market. The firm currently has 50,000 e-mail subscribers, and 25,000 iOS (Apple’s operating system) and Android installs. It works with more than 300 venues in a small-but-expanding crop of cities including New York, Chicago, Milwaukee, and Denver.

The service uses the geographical position of mobile devices and highlights deals based on proximity to where the user is at any given moment. “Users can also browse by deal category [sports bar, club, etc.], day of the week, and by bar name,â€ says Strother. Using the pay-for-performance strategy, Poggled takes a margin on the deals they negotiate with their clients, which negates the upfront costs that other services may require. In addition, in comparison to traditional daily discount sites, Strother and Matthews offer distinct deals. “The difference between Poggled and traditional daily deal sites … is that most daily deal sites offer “flashâ€ sales, which are only available for a short time, whereas our deals are always available for purchase,â€ says Strother.

In engineering their app, Strother and Matthews avoided troubleshooting pockets by picking all-encompassing software. “We didn’t run into many technical challenges while developing the iPhone app,â€ says Strother. “The thing about iOS is you only have to develop an app for one phone. The Android platform is open source, so there is a litany of devices by several manufacturers. It’s tough to develop an application that works seamlessly across all of those devices on the first shot.

“The good thing about the Android marketplace,â€ Strother continues, “is that as soon as you push an update it automatically pushes to devices, so many of those bugs, we’ve cleaned up.â€

Looking ahead, Strother and Matthews have their eyes on longevity in the market. “We’re in it for the long haul,â€ Strother says. “We don’t want to be this flash in the pan company, and we want the people that work here to feel like they’re at a company that has sustaining power.â€