Saving To Become An Entrepreneur 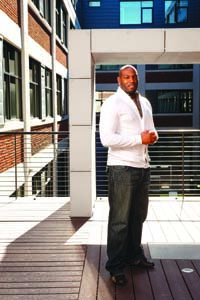 As a key account executive with food manufacturing giant Kellogg Co., Daron Pressley enjoyed a six-figure salary and an extravagant lifestyle. It was nothing for the twenty-something bachelor to spend $400 partying with friends at a local lounge in Washington, D.C., or to whisk off on a last-minute weekend trip to St. Maarten. Since he was easily bringing in more money than he was shelling out, “Spending wasn’t something I had to really be conscious of,â€ the now 30-year-old says.

That’s not to say money management wasn’t important to him. Having watched his divorced father struggle as a single parent to raise him and his two brothers, Pressley resolved to regularly set aside money for a rainy day. “My dad would always say, ‘Save your money,’â€ he recalls. Another lesson his father taught him: Avoid using credit cards. So while Pressley might have been impulsively spending up to a third of his salary, he had no debt and habitually saved about 30% of his paycheck.

But in 2009, Pressley reached a crossroads. “I was at a point where I was pretty successful, but I wasn’t doing what I was passionate about,â€ he says. After months of thinking about what his next chapter would be, Pressley, a former student athlete who had played basketball while at Virginia Military Institute, opened The Premier Athlete in 2010. Pressley had saved enough to handle his living expenses for about 13 months, so he left Kellogg and devoted his energies to his business full time. Through its training programs, the company prepares student athletes for professional success. He works one-on-one with the 70-member youth group of the Bright Side Baptist Church in Lancaster, Pennsylvania, using a renewable monthly contract, and charges up to $70 a month per student. He and his business partner, Jason Conley, go on-site twice a month to work with Bright Side’s middle and high school students and between visits keep in touch via e-mail and Skype. They are seeking to expand their client base by contracting schools and other organizations.

While his savings freed him from needing a paycheck for more than a year, Pressley knew that his money would go even further if he reduced his expenses. First he cut his living expenses, moving from a $2,000-per-month new condo in Bethesda, Maryland, to a $1,250-a-month apartment in Silver Spring. Then, he lowered his car payment from $700 per month to a little more than $300 a month (with a three-year financing term) by going from a Mercedes Benz CLS500 to an older and less expensive car.