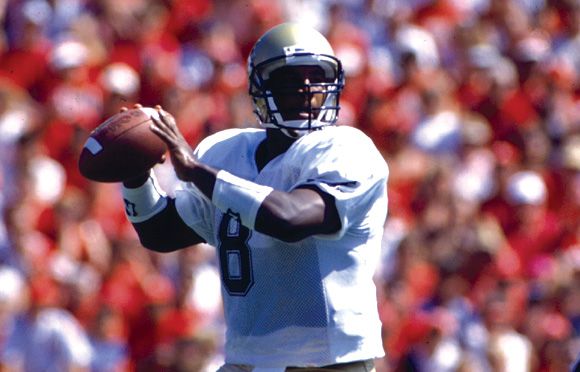 Just days after it was widely reported that former NFL quarterback Daunte Culpepper lost his 10,000-square foot home he purchased in 2006 for $3.6 million, comes the news that the former Pro Bowler’s name is going on a new restaurant near the University of Central Florida’s campus.

Culpepper starred at UCF in the late 90s and is among its most famous alumni.

“At the University of Central Florida, traditions have naturally found roots within its athletic programs,” the website says.

“Those traditions openly invite the young and old, neighbors and friends, freshman and alumni, to become a part of the large, diverse family that is the UCF Knights.”

“Culpepper’s aims to embrace those conventions and give the UCF community another place to call its own for every generation that walks through the doors.”

Culpepper is easily the University of Central Florida’s most decorated athlete. He finished his career responsible for 12,459 yards of total offense, sixth all-time and threw or ran for a combined 108 touchdowns. He made three Pro Bowls in the early 2000s, and led the NFL in passing in 2004 as a member of the Minnesota Vikings.

ProFootball Weekly smugly pointed out that the Dolphins opted to make Culpepper their franchise quarterback instead of signing Drew Brees who, of course, went on to multiple appearances in the Pro Bowl — and a Super Bowl victory with the New Orleans Saints.

“At Culpepper’s,” the website says, “we’ve taken a page right out of UCF’s playbook, hoping to become a place that students, alumni and the entire community can plant its own roots, foster memories and celebrate their unique moments, a place where people will know you by name, and a place that exudes the pride that each Knight carries within.”