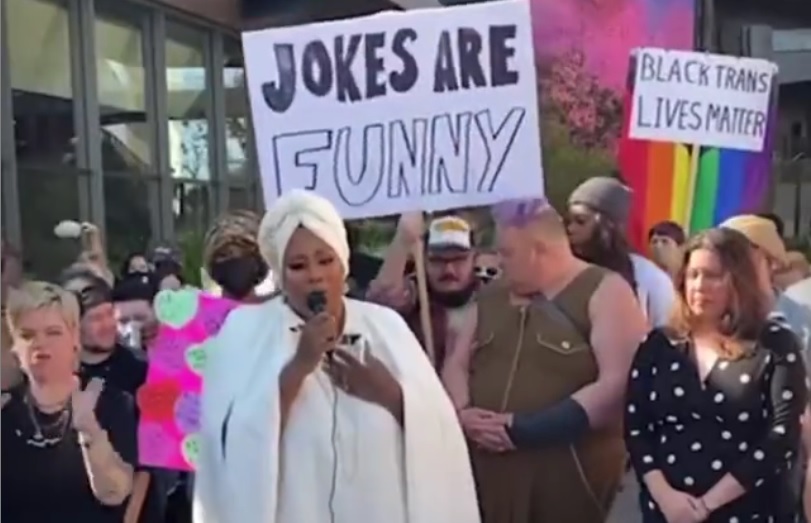 A group of Netflix employees staged a trans-rights protest on Oct. 20 in response to a controversial special by the comedian Dave Chappelle. However, their “hate isn’t funny” signs were met with “We Like Jokes” signs defending the iconic stand-up comic.

The group indicated that they plan on presenting Netflix co-CEO Ted Sarandos with a list of asks, including a request for a disclaimer to be added to Chappelle’s special indicating that it “contains transphobic language, misogyny, homophobia, and hate speech.” They are also requesting that the company create a fund to support trans and non-binary talent.

However, a group of counter-protestors stood close to Preston and her allies, toting signs supporting Chappelle and comedians in general. One supporter even interrupted the protest organizer as she introduced another speaker.

Following the walkout, Preston posted a video on Instagram clarifying that the goal has never been to cancel Chappelle. In the post’s caption, she further explained that she sees this walkout as an opportunity for Netflix to be a leader in making sure transgender people are properly supported and included in the push for diversity.

“#netflixwalkout was about the reality that if the Trans Employment Resource Group had more equity and roles in leadership within the company, they would have been at the decision making table before Dave Chappelle’s last two specials were picked up,” she wrote. “Corporate diversity, equity, and inclusion teams are still missing the mark when it comes to career building and economic growth for the trans community.”

In a statement on Wednesday, Netflix said that they respected the employees’ decision to walk out and recognized they had “much work to do both within Netflix and in our content.”