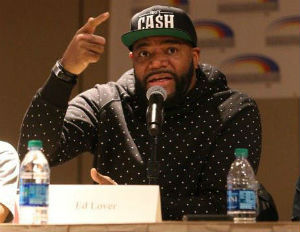 The day began in familiar financial fashion at the Sheraton New York Times Square Hotel withÂ The Wall Street Project introducing its Asset Management study during the panel “Money Where it Matters: Managing Corporate, Endowment, and Foundation Funds.â€ Focusing on minority asset management firms like Ariel Investments, and Exelon Corporation, talk transitioned into the day’s second panel, “Access to Capitol.â€ It continued the summit’s three-day theme of creating anÂ even economic field to achieve equality for African Americans. “There’s nothing that African Americans cannot do,â€ said Rev. Jackson. “When the playing field is even and the score is transparent we can make it.â€

Jackson’s sports related quote was perfect for the day’s “Access to Capitalâ€ luncheon that featured a unique one on one interview with former CEO of Microsoft turned owner of the Los Angeles Clippers, Steve Ballmer. Full of basketball references and braggadocio, Ballmer discussed everything from economics classes he took as a child that hooked him on business to his love of technology. “Any business you are in today, you are at a disadvantage if you are not tech savvy,â€ he said. “Do you understand the potential and how it can apply in business?’â€

When conversation changed to diversity, Ballmer spoke of his own contribution. “I just hired the only female president in the NBA from the business side. The real question is, ‘Where do we go? How do we be a positive productive force in the community? Nobody has made such progress that they should pat themselves on the back,” he added.Â “You better have real processes to ask the real questions.”

The packed panel ran in pure hip hop fashion holding little back when discussing views on ownership and the negative effect rap music has on youth. “They use our music and content and survive, but we own none of it,â€ said Williams, a former editor at The Source Magazine who is now CEO of Prophet From It Entertainment. “It’s important for us to have control over that. We’ve got to think as warriors, not passive. We’ve got to take control. Ownership, ownership, ownership.”

Rev. Jackson even took a moment to address the room sharing his perspective on hip hop. “What I like about hip hop is its struggle for consciousness,â€ he said. “You who have the gift of music, these are God given gifts. The power you have over children’s minds is incredible.Â  This can be a burden. Strong minds break strong chains.â€

Ending hip hop to talk sports, the day’s final panelÂ  “After the Cheering Stops: The Next Generation of Athlete Dealmakers,â€ took over the room to discuss opportunities for athletes off the field.