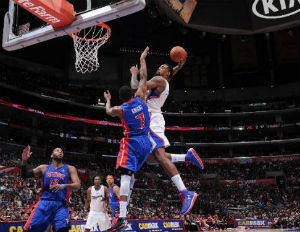 Highlights like this one landed DeAndre Jordan in the newest SportsCenter commercial.

He had the best dunk of the 2012-13 season, towering over Detroit Pistons guard Brandon Knight in something of a “highlight” that, within minutes, cast Mr. Knight in endless internet memes in which he was said to have died. So, ESPN and the creatives who put together the network’s SportsCenter commercials knew what they were doing when they invited Clippers center DeAndre Jordan to be in its new spot.

In the commercial, Jordan tries to enter the Top 10 plays “club” — only to find out that it’s not necessarily what he expected.

If nothing else, enjoy the footage of Jordan drinking out of a red cup in his Clippers uniform, a la Ron Artest.