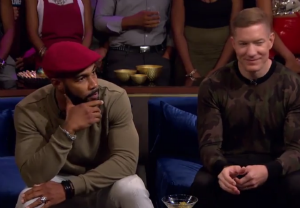 As a 28-year-old black woman dedicated to the advancement and liberation of people of color, I found PowerÂ actor Omari Hardwick’s comments on Black Lives Matter and millennials to be very disturbing, to say the least.

I was sitting in theÂ studio audience during a live taping of VH1Live on Sunday when he was featured as a guest on the new talk show. After the show, he shared his thoughts on millennials during a post-show discussion that was live streamed on Facebook.Â  The “millennial generation is brilliant, but not necessarily standing for enough,â€ said the 41-year-old actor. Later, he added, “If you’re under 30 and you stand out, then it’s easy to stand out because this generation is not doing what they should.â€

Conflicted by his comments, I challenged his viewpoint off-camera while he was greeting members of the audience. I extended my arm to shake his hand and then told him that he “was wrongâ€ about ’80s and ’90s babies. “We started Black Lives Matter,â€ I said.

In response, he dismissed Black Lives Matter as just a “hashtagâ€ and told me that the movement was really created “by a black man that was shot 400 years ago.â€ Unfortunately, he was quickly pulled away by staff before he could finish explaining his puzzling statement.

I was left stunned by his remarks, but it caused me to realize that many people are not fully aware of the scope and social impact of Black Lives Matter. Since its inception in 2013, it has evolved from a Twitter hashtag into the mantra for a new age civil rights movement against black oppression. However, many feed into the myths and misconceptions about the movement often fueled by right-wing media, which devalues BLM as a group of rowdy protesters, rioters, and thugs that make a lot of noise. Others don’t understand how change works and therefore, don’t recognize incremental steps that materialize into larger policy changes later on.

No, Omari: BLM is not merely a hashtag or a passing moment that will come and go. Rather, it has ignited a new generation to join the fight for black freedom that began on the backs of slaves and has been carried on through the civil rights era. Although a lot must be doneÂ to achieve equality, BLM has made a number of significant accomplishments in just a few short years. Here are six:

The Democratic Party is often criticized for taking black votes for granted without really addressing our needs. However, the presence and persistence of Black Lives Matter forced both Hillary Clinton and Bernie Sanders to directly address the systemic ills that plague people of color within their campaigns. After Black Lives Matter protesters hijacked a podium at a Sanders rally back in 2015, the former presidential candidate immediately released a detailed criminal justice reform platform.

Likewise, during a meeting with Black Lives Matter protesters last year, Clinton was forced to confront the Clinton administration’s role in the mass incarceration of black and brown people back in the ’90s.

BLM demonstrations over police violence against black and brown people have pressured local officials and leaders to resign and implement structural changes. For example, both Chicago Mayor Rahm Emanuel and Baltimore Mayor Stephanie Rawlings-Blake fired their police chiefs following protests over police killings ofÂ  unarmed black men. Plus, a number of local police departments have implemented the use of body cameras.

Progress in the effort to reduce excessive police force has also occurred on the federal level. In response to the backlash police received in handling protesters in Ferguson, President Obama banned the U.S. government from arming local police departments with certain types of military-style equipment. Plus, the FBI announced in December a new initiative to improve the tracking of civilians killed by police.

BLM leaders know that the fight against anti-black racism does not stop at a tweet or at the end of a protest. Hundreds of organizers have started local BLM chapters across the nation, which work to mobilize people, hold local officials accountable, organize community forums, and build a network specializing in legal aid and emergency response.

BLM has ignited college students around the country to fight against racial discrimination. As a result, pressure from student protesters and athletes at the University of Missouri forced the university president to resign. In turn, that catalyzed widespread college demonstrations that forced administrators to examine the culture, practices, and history that perpetuate racism at schools such as Yale, Harvard, and Georgetown.

Contrary to what many naysayers think or say, BLM is doing more than causing traffic jams and making noise in the street. They’re actively pushing policy proposals that would bring lasting changes for years to come. That is evident by Campaign Zero, a platform that leaders released in 2015 for police reform, and The Movement For Black Lives platform, which proposed a list of reforms for black freedom and justice earlier this month.