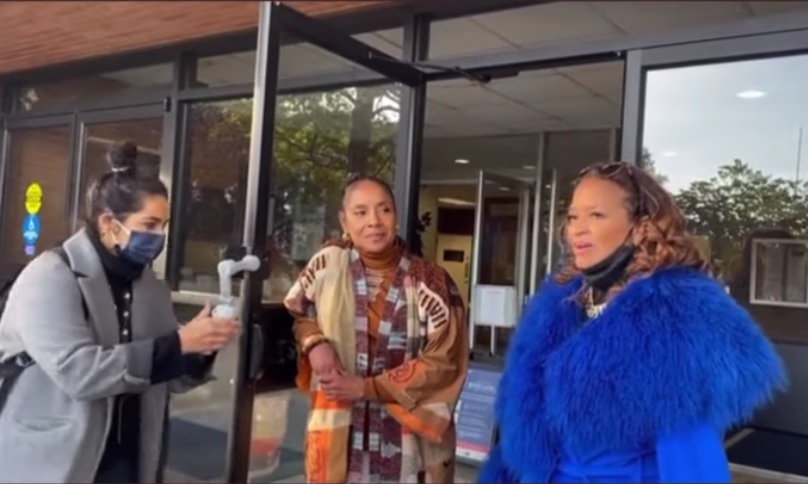 As the student protest on Howard University’s campus approaches the one month mark, alumna Debbie Allen made an appearance at the school Friday to voice support for the protestors.

In a video circulated on social media, Allen and sister Phylicia Rashad can be seen entering a building on the D.C. grounds to attend President Wayne Frederick‘s annual State of the University address. In response to a question asked before the recording starts, Allen said she was also at the school in hopes of checking in with the students.

“We know what the Howard student body means. In any country when the students don’t speak out, the nation is not doing well,” Allen said to the group gathered outside of the building.

Allen was almost immediately interrupted by Rashad, the current dean of the Chadwick A. Boseman College of Fine Arts at Howard, who insinuated that the students’ concerns have not only been heard, but addressed. When Allen attempted to confirm that that was the current situation, Rashad cut the interview short and ushered her sister into the building, as students can be heard in the background negating the dean’s statement.

The protest at Howard started Oct. 12 when the Howard University Student Association held a town hall supported by the Live Movement—a national student coalition for HBCUs—to discuss the deplorable conditions in several of the school’s on-campus housing facilities.

“The HUSA Town Hall was intended to connect students to resources and be a meeting point for peers with questions, grievances, and concerns regarding their Howard experience,” HUSA President Kylie Burke told Rolling Stone. “Administrators were invited to attend but unfortunately did not.”

After the town hall, approximately 30 students refused to leave the Armour J. Blackburn Center until three demands were met: an in-person town hall with President Frederick and administration scheduled before the end of October; reinstatement of all student representative positions on the Board of Trustees with voting power; and a meeting with the president and chairman of the board to go over a housing plan that could protect future students from experiencing the same unlivable conditions in the school’s dorms.

During his address to faculty and students, Frederick insisted that the students are being heard and that their concerns are being addressed.