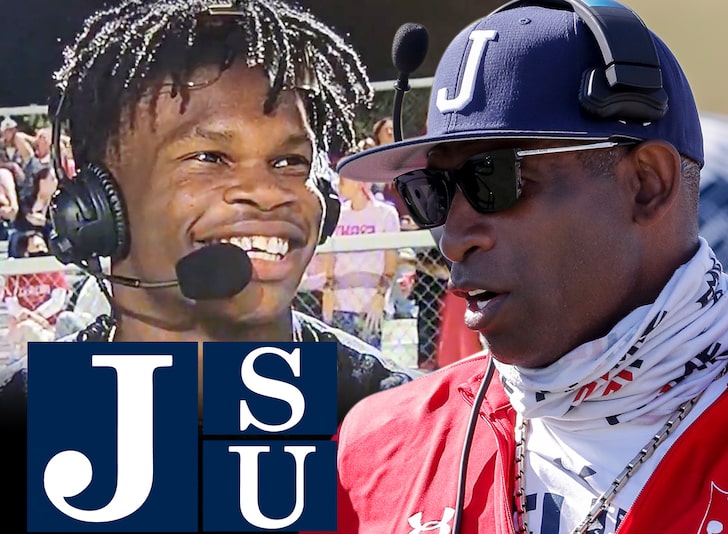 Ever since NFL Hall of Famer Deion Sanders accepted the job as football coach at Jackson State University, the fortunes of the HBCU have risen exponentially.

Sanders’s latest win comes with the signing of the No. 2 high school football prospect, Travis Hunter, who skipped out on his commitment to attend Florida State University to join Sanders and his crew at JU. And it seems the schools that lost out are starting a dust-up online and spreading rumors about how Sanders could secure such a high-profile prospect.

Some of the scuttlebutt has it that Jackson State paid Hunter a million-plus dollars to join the JU team— something Sanders vehemently denies.

While appearing on the ESPN podcast Keyshawn, JWill & Max, with Jay Williams, Sanders laughed and disputed the allegations that the university is paying Hunter. He said since he did such a wonderful job of recruiting Hunter that his detractors (white schools) needed to make an excuse for him being able to bring a major high school prospect to an HBCU.

“I heard a million and a half, and I heard Dave Portnoy over at Barstool. That’s the biggest lie I ever heard. You know what that is? That means we kicked your butt, we took what was ours, and now you gotta make up an excuse why. Ain’t nobody get no million and a half. I wouldn’t pay my son a million-and-a-half on NIL. How am I gonna coach a guy making more than me?”

According to CBS Sports, the No. 1 prospect in the Class of 2022, Hunter, stunned the college football world when he decided not to sign with Florida State University, with whom he previously committed. Instead, he reneged and flipped his decision and chose the HBCU Jackson State University.

“Florida State has always been a beacon for me,” Hunter stated in his Twitter post. “I grew up down there, that’s where my roots are, and I never doubted that I would play for the Seminoles. It’s a dream that is hard to let go of, but sometimes we are called to step into a bigger future than the one we imagined for ourselves. For me, that future is at Jackson State University.”