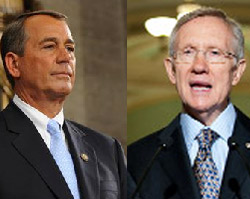 Congressional lawmakers have just a week to negotiate a deal to fund the federal government before March 4 but are widely divided on where spending cuts should come from. House Speaker John Boehner (R-Ohio) is calling for a temporary solution that would involve a two-week resolution that would enact $4 million in cuts while the two chambers negotiate a long-term continuing resolution. Senate Majority Leader Harry Reid (D-Nevada), however, is arguing that the temporary measure should freeze spending at current levels and that the Republican proposal would be economically damaging.

“The Republicans’ so-called compromise is nothing more than the same extreme package the House already handed the Senate, just with a different bow. This isn’t a compromise, it’s a hardening of their original position,â€ said Reid spokesman Jon Summers. He also said that it would cut spending levels during those two weeks at the same rate as the $61 billion proposal does through the end of the fiscal year and both proposals are “non-starters in the Senate.â€

“Senate Democrats have already agreed to a five-year spending freeze and $41 billion in spending cuts and we’re willing to go further. But that requires the sort of good-faith negotiations House Republicans refuse to engage in,â€ he said. “Less than 90 days into the job, House Republicans seem more interested in shutting down the government than showing the leadership necessary to create jobs and help the economy recover.â€

Boehner meanwhile has already begun reaching out to his troops to build support for the short-term resolution before they return to Washington on Monday and avoid a government shutdown. “We have passed one resolution and will pass another. If government shuts down it will be entirely on Harry Reid,â€ said a senior leadership aide.

Still, it will be particularly important to get freshmen Republican on board with the proposal. Last week, they forced House leadership to enact deeper cuts in the CR than was originally planned and are sure to return to work more fired up than ever.

“I gave my word to my constituents when I was elected in November 2010 that I would do all I can to cut federal spending and get this economy turned around so employers can begin hiring again,â€ Rep. Allen West (R-Florida) told BlackEnterprise.com. “Whether for the entire year or for two weeks, CRs are going to accomplish our goal of reducing spending.â€

Click here for the rest of today’s Washington Report updates.