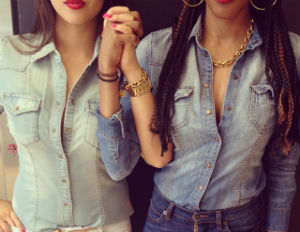 “There is no excuse and never an invitation to rape.” Wednesday, April 29, was #Denim Day, an annual campaign organized by advocacy group, Peace Over Violence. #DenimDay encourage peoples to wear denim to raise awareness around rape and sexual assault around the world.

According to the campaign’s Website, the denim movement was originally triggered by a ruling by the Italian Supreme Court where a rape conviction was overturned because the justices felt that since the victim was wearing tight jeans she must have helped her rapist remove her jeans, thereby implying consent.

The following day, the women in the Italian Parliament came to work wearing jeans in solidarity with the victim. Peace over Violence developed Denim day as a way to show their solidarity to the activism surrounding issues of sexual assault.

Many companies and advocacy groups are compelled to initiate the domestic violence conversation admitting it’s a talk many people choose to shy away from.

The Allstate Foundation Purple Purse is also making it fashionable to talk about domestic violence and the financial abuse that traps women in abusive relationships.

They say two-thirds of Americans believe that domestic violence is a serious problem, yet just more than 1 in 3 have ever talked about it. The program ignites fundraising for more than 140 national, state and local domestic violence organizations. Funds raised will support life-changing financial empowerment services to help domestic violence survivors build safer lives for themselves and their families.

The Purple Purse project raised $248,5488 in 2014 towards their cause and had celebrity and Scandal star Kerri Washington served as an ambassador for the organization, to encourage people to talk openly about domestic violence and financial literacy.

Washington was appointed by President Barack Obama to the President’s Committee of the Arts and Humanities in 2009. She is also an active member of the V-Counsel, an esteemed group of advisors to V-Day, the global movement to end violence against women and girls.

#DenimDay got much support and attention on- and offline, with popular jean brand, Guess, signing up as their official fashion sponsor and donating $2 for every demin purchase made from April 20-29.

Instagram and Twitter thrived with classically filtered fashion pics of guys and girls draped in the indigo fabric,some, from head to toe.

Take a look at #DeminDay supporters, rocking their jeans across Instagram, below.

[WATCH] Female Creatives Talk How They Make a Passionate Living