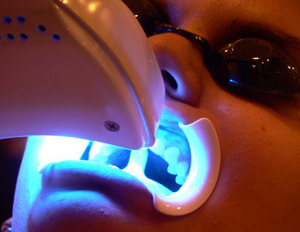 Ever sought teeth whitening services from someone other than your regular dentist? Apparently, there are state dental boards all over the country that have a problem with that.

The regulatory groups are sending “cease and desist” letters to small entrepreneurs they’ve deemed to be practicing dentistry without a license, the New York Times reports.

The “unlicensed dentists” are fighting back by suing the regulatory boards. In Alabama, two entrepreneurs are “arguing that a law declaring teeth whitening the exclusive province of dental professionals is unconstitutional,” the Times reports.

Teeth whitening began flourishing as a business in the 1990s.Â The service can set you back $300 or more. By 2006, most dental practices were making about $25,000 a year on it, according to a survey by the American Academy of Cosmetic Dentists.