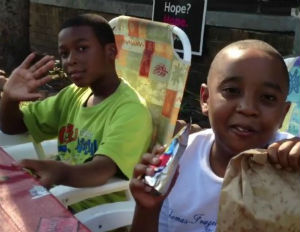 The Grio’s Jay Scott Smith is reporting the touching story of a 9-year-old Detroit boy who raised over a $1,000 with a lemonade stand to help out his struggling city.

News hit earlier this year of Detroit possibly facing insolvency with a debt in excess of over $100 million.

9-year-old Joshua Smith raised over $1,200 in the span of three days with his own lemonade stand.

“I just heard that we were in a crisis and I wanted to help,â€ Smith told TheGrio, crediting his father with the idea to sell popcorn along with the lemonade. “I was trying to come up with [a goal] of $600 or $700 and my mom suggested $1,000.â€

Mayor Dave Bing thanked Smith for his efforts in a video that can be viewed at TheGrio.

Check it out here as well as the rest of the story.