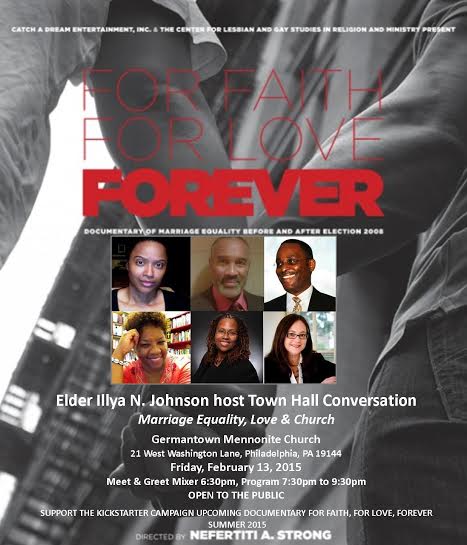 Despite media portrayals suggesting complete disapproval, ordained African-American pastors and ministers were given the opportunity at a town hall meeting in Detroit to speak openly about their reasons for being for the inclusion of same sex couples, their right to marry, and being active members of their respective congregations.

Also joining the conversation were gay rights activists Rev. Roland Stringfellow and Michelle Brown along with civil rights attorney Dana Nessel during the event which took place at the Wayne State Law School auditorium and was hosted by the Detroit Regional LGBT Chamber of Commerce.Â A federal judge recently ordered Michigan to recognize more than 300 same-sex marriages that took place on the one day the state’s gay marriage ban was temporarily lifted last year.

At the center of the town hall meeting was the upcoming documentary For Faith, For Love, Forever, which explores the debate on same-sex marriage in the African-American community and its inclusion within the black church.

The documentary was created by filmmaker Nefertiti Strong, who began her entertainment career as a rapper at age 17. She recorded an album entitled L.I.F.E. (Living in Fear of Extinction) that sold upwards of 500,000 units and received a Grammy nomination. After starring in Mario Van Peebles’ “Panther,â€ she also gained insights and knowledge of theatrical and film production.

To be released this summer Strong’s film ForÂ Faith, ForÂ Love,Â Forever offers its viewers a powerful exploration of the effect that California’s Proposition 8 hadÂ pre- and post-Election 2008 on the gay community.Â Â The discussion of black gays having a right to marry as aÂ matter ofÂ inclusionÂ inÂ the church makes for a most diverse and unique topic.

The ability to marry and arrange for spousal benefits related to insurance, taxes, pensions, hospital visitations and adoption rights continues to elude thousands of couples across the nation.

The documentary ForÂ Faith, ForÂ Love,Â Forever poses the question: Â ‘Now that we found love, what are we gonna’ do with it?’ If the right to marry is not chief among the human and civil rights about which we’ve an investment, then which rights trump it, and what are we prepared to do to achieve them?

The next town hall meeting is slated to take place in Philadelphia on Friday, February 13, 2015.