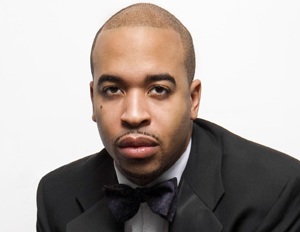 In the age of the internet, most people feel that the best way to obtain information is through blogs and websites. You don’t even have to log into a computer in order to access the web at this point in time, just reach for your smart phone. There has been whispers that the magazine business is dead or on its way there, dying a slow death.

Don’t tell that to Bleu Magazine’s De’Von Christopher Johnson. Yes, his property does have presence on the web, but, who doesn’t these days? You ask him what makes magazines work and he’ll have an answer for you! If there is anyone who feels like there is no use for magazines these days, then they need to have a conversation with Mr. Johnson, he differs on that opinion.

The industry veteran who switched up from working at labels to publishing magazines is heading towards serial entrepreneurship as he works toward a lofty goal. Just remember, don’t tell him that magazines are dead.

BlackEnterprise.com: I know you’ve been involved in the entertainment industry for a number of years, could you tell us how you got started and which companies were blessed to have you as an employee?

My first job after graduating from Seton Hall University with a degree in Communications was at Def Jam. I owe it all to fate. I had heard of an open position from a friend that had just been hired as an assistant in the publicity department.Â  The marketing department was looking for someone new and energetic that could be shaped and molded into the Def Jam culture. I was there for 2 years before moving on to Universal Music Group as an Advertising Coordinator. Luckily both companies were under the same umbrella at the time and only a few floors apart. I stayed there for 2 years also, that seems to be my max out level, lol. My last position at a record label was as a Marketing Manager for Warner Music Group’s Asylum Records. I think there is where my learning curve grew tremendously. From Def Jam, a well-established and well-known brand, to an upstart, put every skill I had acquired to the test. My former def Jam boss, Chonita Floyd-Sasso, was brought on to head the marketing department for Asylum. She called me up and offered me the position over the phone. She hadn’t even set up her office yet and I was hired. I miss my 24th floor office with a view. I’m almost there though, well at least halfway, Bleu Magazine has a 12th floor office.

You’re President and CEO of Bleu Life Media, why did you decide to start Bleu magazine? Could you explain the mission?

I started Bleu from my Harlem apartment. I always loved magazines and still do. There is something nostalgic about seeing yourself or people that look and live like you on the pages of print media. We set out to create a new platform for men of color to be shown. Then and now we were the only urban luxury magazine targeted at men of color. Moreover, we are Black owned. Yes, there are other “urban” magazines out there. But I don’t relate to them, and most of my friends and the people I grew up with don’t either. We decided to cater to an aspirational audience instead of emulating the status quo.

As most of us experience pitfalls and sometimes things not going the way we anticipate, have you had any negative and/or not-so-good experiences that helped shape you to become successful at what you do and how have you used those experiences to overcome that/those barriers?

When it comes to the magazines, it has helped tremendously to keep acquaintances in the entertainment industry. Getting content has never really been a hurdle. The first few years were rough financially though. I remember exhausting my 401k and maxing out five American Express cards just to print. I didn’t know how the magazine world worked. So I had to learn by trial and error. Now I absorb as much information as I can. I read other publications. I go to seminars and conferences. I especially like to read about failures in the publishing industry. I try my best to avoid their mistakes.

However, my greatest hurdle has been trust. You have to be very careful whom you share your dreams with. I made that mistake recently. Someone actually tried to claim one of my ideas as her own. So now my attorney has to deal with it. Which is costly and time consuming. Next time I will just trust my gut.

You started out in music and marketing and now you are in publishing, any there any plans to venture into other areas to extend your brand and/or any other businesses?

I love real estate. I purchased my first investment property when I was 25 years old. I’m a serial entrepreneur, there is no business I won’t try as long as it is legal and doesn’t destroy communities. Currently we are working on developing a mobile called BAAGD.

Since you’re essentially an industry veteran, how has technology changes helped you in your views on how you conduct your business these days and how do you incorporate it into what you do now?

Technology is the reason why Bleu is entering its eighth year of existence. We had very little money when the magazine started. At the time Myspace and email marketing were the only tools we had at our disposal. Today we rely on Facebook, Twitter, and Instagram. These platforms enhance the brand experience. There is this crazy ideal that magazines should be afraid of technology. We embrace it. There is no way a small company like Bleu Life Media & Entertainment could have a presence in emerging markets without the help of technology. Of course I have an iPhone, it has become my best friend.

What should we expect in the future regarding Bleu?

Look out for the full launch of BAAGD in the summer of 2014. Also check out our partner publications NYC based LACED and Los Angeles based 360 Magazine. We also just launched our new tween girl imprint XO Girl.

There have been rumors for years proclaiming magazines being dead or about to die, yet, years later, some magazines are still flourishing, why do you think, with the internet being as big as it is, some magazines can still function and make money?

Some magazines needed to die. Let’s be honest there was a lot of pointless crap out there. And you are right, the internet became this huge monster. But, it may be a little too big. Very few people spend more than 30 seconds on a given web page. What a print publication offers is a much more intimate experience. I go to houses of friends and relatives and see magazines from 10 years ago on their coffee table. Something about that specific printed issue touched them and they want visitors to share the experience.

For our publications specifically, people of color are only five decades out of Jim Crow. Medgar Evers, Malcolm X, Martin Luther King Jr, and many other nameless heroes didn’t live centuries ago, there are only a few generations between us and them. We as a people need and deserve to see ourselves in print. Go to any newsstand and you can count on your hands the faces of color. I think we need more magazines. I have no fear of competition, having a saturated market would be amazing-but we are nowhere near that point.

Some may label you a tastemaker and/or a trendsetter, do you agree and even if you don’t agree, what puts you in that category and why do you think people look to place you there?

I take it as a compliment. But I am just a product of a great family and community. Luckily for me I was taught that your greatness lies in the ability to look in the mirror and smile at the person you see. If following your passion and making a contribution to society makes me a trendsetter or a tastemaker, I gladly welcome the title.

What’s next for DÃ©Von Christopher Johnson?

I’m working on my master degree in Journalism. After seven years in publishing I still want to become a better writer. I have such a huge respect for the journalism industry and for those on the front line to tell the story of our people. After I finish school, my mother and I plan on writing a series of children’s books. She raised me as a single parent and I want to share some of the amazing experiences I had growing up.

There is also a documentary being filmed about what we do at Bleu.

Tell us something about you that your friends and associates may know, yet, the general public won’t and doesn’t know.

I’m an Eagle Scout, which is the highest honor in scouting. Something I have in common with former presidents, world leaders and prominent businessmen.