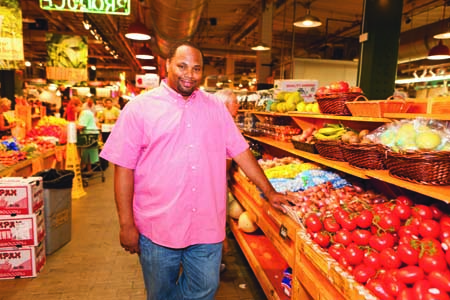 Start investing for retirement. McKinley has forfeited approximately $18,000 in employer match dollars by not contributing 5% to his retirement account since he started in 2004. “Minimally, he should increase his contributions to at least 5% of his salary to take advantage of his employer match,â€ says Akbar. Based on his current take-home pay, McKinley should contribute approximately $310 per month into the plan, which is about 7% of his pay. With his employer match of 5%, this will help put him on track for retirement.

Finish paying off debt. For McKinley to really secure his financial future, he must commit to a savings and investing plan and not incur any new debt. Akbar recommends that he use the $2,000 Financial Fitness Contest winnings to pay down his highest interest debt (Discover Credit Card; $3,395 at 15.64% APR). After applying the $2,000 toward that debt and with continued payments of $150 a month to the remaining balance ($1,395), he can pay off his balance in about nine months. McKinley also has a medical bill for about $1,394, toward which he pays $120 monthly. He should continue making those payments and will have that bill paid off in 12 months. Akbar then suggests that he redirect the $270 toward his retirement and savings. McKinley should continue his $305 monthly payments toward his automobile loan.

Build an emergency fund and curb spending. Akbar suggests that McKinley focus on building at minimum three months, but preferably six months, of emergency reserve funds for regular monthly living expenses. Taking public transportation saves McKinley $120 a month, which he should apply toward his emergency savings. McKinley estimates that he can reduce his monthly cable bill from $145 to $85 by switching to basic cable. Once his contract with his cell phone carrier ends in January, he plans to change service providers. His bill is currently $90 a month and a new plan under MetroPCS will be $50 a month. be suggests he apply these monies toward his emergency fund. Once he reaches his six month goal he can then funnel that money into his high-yield savings account.