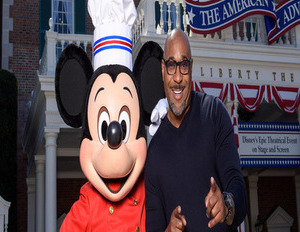 The “Happiest Place on Earth” might just be the tastiest place on earth right now with the kickoff of the 21st annual EpcotÂ International Food & Wine Festival. This year’s event, which runs through Nov. 14, boasts a stellar lineup of blackÂ celebrity chefs.

Top Chef alum, Nashville hot chicken mama, and Emmy Award winner Carla Hall will be on hand with ABC’s The Chew from Oct. 5 through 7 for a full week of episodes that will air starting Oct. 10.

And that’s just the tip of the iceberg when it comes to the black celebrity chefs who will be participating in the special events and demonstrations. According to a press release from Disney, the festival will also feature:

New this year will be anÂ Islands of the Caribbean marketplace andÂ World Showcase, with delicacies such asÂ Mojo Pork with Black Beans, Cilantro Rice, and Pickled Red Onions, Pescado con Coco, and Pigeon Peas and Rice with Coconut Sauce.

In addition to all the culinary tastings, there’s also an “Eat to the Beat” concert series with nightly performances from top artists, including Boyz II Men, Chaka Khan, Jeffrey Osborne, and Billy Ocean.