"Disrupted" Shows Age is the New Black in Silicon Valley 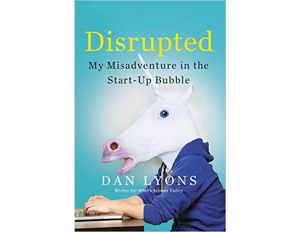 The tech industry has a habit of keeping outsiders at arms’ length–namely, women and people of color. Yet, many who don’t fit either demographic are also finding themselves at odds with Silicon Valley culture when they reach middle-age.

The book is Lyons’s narrative about spendingÂ decades as a tech journalist who was ousted from his job at Newsweek and then faced with no other career choice except a marketing position at HubSpot.

His description of the work environment could well be applied to a nursery school.”Lots of bright, basic colors, plenty of toys, and a nap room with a hammock.â€ He writes that the “office-as-playground trend started at Google, but now has spread like an infection across the tech industry.â€

HubSpot is stocked with beer, candy, nerf guns, and shower rooms that the largely Millennial-aged staff use as “sex cabinsâ€ for workplace hookups.

It’s funny, yet disturbing stuff. Not so humorous: not only is there a lack of generations in HubSpot’s workforce; there is a lack of racial diversity.

“They hire white kids in their twenties,â€ Lyons said in a statement to BlackEnterprise.com.

“This amazing, dynamic industry, one that is creating such tremendous wealth, is also the least diverse industry on the planet,â€ says Lyons.

“Age bias, race bias, and gender bias are pervasive. I experienced this through the prism of age, but it made me acutely aware of the problem that a lot of other people face. The tech industry has walled itself off from a huge part of the population and essentially told us that we are not welcome to participate. I’m hoping my book starts a conversation about this and leads to some changes,â€ he says.

If one is from an urban, inner-city environment, goes to an HBCU, gets an engineering degree, and seeks work at a startup, it’s not a far-fetched possibility that potential employers could see a person of color as not “a good fit,â€ into what is similar to frat culture at a PWI.

And forget it if you are a person of color, female and of a certain age– not only is there a slim chance at being hired at such a company, but trying to get your own business off the ground by seeking funding from venture capitalists–the very ones who nurture this type of non-inclusive Silicon Valley mindset– is almost impossible.

Lyons, who left HubSpot to become a writer on the HBO showÂ Silicon Valley, says of the book and of his time in marketing, “Things go downhill quickly, and it ends in disaster. But it’s a funny disaster.â€