Diversity on Campus: Why Is it (Still) an Issue? 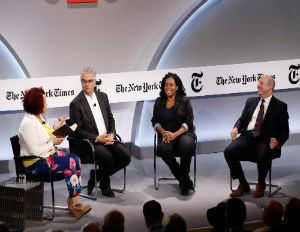 In a panel titled Diversity on Campus: Inclusion and Expression, three college leaders and award-winning Times reporter Nikole Hannah-Jones explored the resurgence of campus protests, especially as they reflected tensions around race and racist campus legacies.

It’s 2016, and Black Students Are Still Protesting. Why?

In response to Hannah-Jones’s question if schools were getting better, why were students still protesting, Gordon-Reed responded that things were indeed better, but that certain issues remained.

“When I was in school there was a question of whether or not black studies would be a department; now it is on many campuses. We’re no longer questioning whether or not we belong on these campuses the way students did in the 70s or the 90s.â€

Krislov noted how the Black Lives Matter movement resonated with black college students. “Students embrace that, and they want to make a difference,â€ he said.

He also mentioned that the social climate is one of contention, and that the job of creating community out of diversity is the great challenge of college leaders.

Christakis acknowledged that although students are going to college because they’re committed to reason and open discourse, this creates tension. How to provide an environment that allows people to respectfully struggle with each other is an ongoing question.

Another issue is the range of socioeconomic statuses on today’s college campus. Krislov mentioned a student who could not pay for glasses or dental care–hardly luxuries–because of financial constraints. He suggested the need for greater social and financial support for low-income students.

Is Diversity a Meaningless Word?

Is it diversity or inclusiveness that colleges should be aiming at? Hannah-Jones suggested that diversity can mean anything, and that just having a lot of different kinds of people–racially, socioeconomically, and otherwise–doesn’t translate into inclusiveness.

Christakis said that he had heard from students that they didn’t feelÂ a partÂ of the school community, which he described as “alienating, sad, and heartbreaking.â€ He also said that institutions reflect the larger society, and cannot protect students from insensitive language or behavior, though they can denounce it.

Gordon-Reed noted that students’ moral development is also part of an institution’s responsibility, and Krislov noted that measures like facilitating dialogue and using residential learning communities could be effective in improving student culture.

For more on this important topic, visit this website.