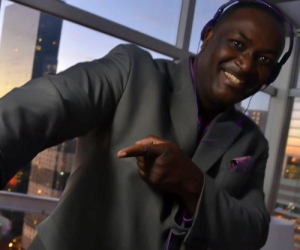 Sometimes making a career choice at a young age never turns out being what we end up doing, especially in this day and age. It is also great when our ‘side hustle’ becomes a major source of income.

Although he went to New York City to pursue a master’s degree in clinical social work from his hometown of West Virginia, his passion led him down the path to constructing musical blends for varied audiences. As with any other superhero, by day, he is a mild mannered social worker and when the work day is over, this is where DJ Jon Quick comes in!

Quickly rising up the ranks to do corporate events for notable companies, he recently he signed on as a promotional DJ for Alize’ and his mixes can be heard on AlizeClassicFlavors.com.

DJ Jon Quick aka the Turntable Superhero, takes off his cape for a moment to speak to BlackEnterprise.com.

Blackenterprise.com: Congratulations on your recent hiring at WBLS (107.5) in NY. How did you get that gig and do you have or have you had any other radio gigs?

DJ Jon Quick: I was actually approached by an old friend of mine, Chris Mercado, the production manager at WBLS, about a year and a half ago. He said that he’d been noticing my intense schedule and the fact that many of my events were community oriented. He said that he had started to see my name everywhere he turned, and thought that I’d be a great fit for the WBLS family due to my huge, young urban professional audience and distinct musical mixing styles. I have also recently agreed to be part of the the Washington D.C. based WMMJ Magic 102.7 mixmaster team as well.

Could you briefly tell us how you got into the DJ game and what keeps you going?

I self taught myself how to mix as a 15-year-old, and it definitely was great to be the go to DJ while attending Marshall University in the late 80s. Now with that being said, I didn’t take the craft serious until I had a talk with one of Biz Markie’s acquaintances back in February of 2005. He told me how much Biz makes on some nights and I was truly amazed. At that point, I knew that because I was in NYC, pure skills would not be enough. I needed a great marketing plan and also needed to form some great business relationships. It seems to be working as I’ve averaged over 200 events a year for the past 4 years.

I love doing corporate events. I find that with corporate events, the energy in the room is normally great. These folks work hard and in most cases, play hard. I also find that I am more likely to get residual business opportunities from these events more so than regular party events. Not to mention the pay is normally better as they respect the craft as a true business. As far as my approach, it doesn’t change. I try to carry myself as a professional, whether it’s for a nightclub or a corporate client.

You’re involved in politics, which can always be good for business as you have an initiative named Deejays For Obama. How did this come about, what is the purpose and what other deejays have been participating in this?

I was approached in late January 2012 to be a partner in a fundraising event by Obama Fundraising Committee member, Brian Benjamin, and his NYC based non-profit, Young Professionals for Change. Seeing how I had just did a successful fundraiser the year before called “Deejays for Japan,” I decided to call the event “Deejays for Obama.”

Because everyone cannot afford to attend those amazing $5,000 a plate fundraisers, I wanted to do an event that the average working class professional could come to and just donate whatever they could to the Obama victory fund. Some of the great DJs we’ve had volunteer their skills were D-Nice, Spinna, Pete Rock and Goldfinger to name a few.

Five events later, we have raised over $12,000 for Obama’s campaign. I should add that some Obama campaign staffers took notice and recently coined their own official initiative “DJs for Obama.”

Outside of the obvious talent needed to spin records and knowing how to command a crowd through music, what else is needed to be successful in the DJ arena?

I think one of the most important things is creativity. It’s easy to create a playlist and just play what’s popular. My mission is to make the patrons remember me by mixing the records in a way that makes them look to see where the DJ booth is located; so they can give me that nod of approval or in many cases; a trip to the DJ booth just to give me a high five. You also should learn your music and be open to step outside your comfort zone. It’s easy for a DJ to become stale if he doesn’t believe in being a bit adventurous from time to time. From the business side of things, be prepared to play for almost nothing until you develop a following and a positive reputation. Patience is the key in this business.

There are people who utilize their main money maker to invest in or do something else that may or may not relate to their craft, do you have anything else you are working on?

Yes. As a long term goal, I’m developing concepts for a syndicated mixshow. Tossing ideas around so it’s still in its early stages but I want to have a show that I can rock for the rest of my life. I should also add that I will continue to sponsor and produce my own awards show, “Beauty and The Beat: The Heroines of Excellence Awards.” It’s an awards event that honors 8 female rising icons in their respective professions during National Women’s History Month. Now in its 4th year, past honorees include actress Rochelle Aytes (Madea’s Family Renunion), supermodel Maya Haile and TV producer Lorraine Haughton (The Wendy Williams Show). All proceeds from the event goes to charity.

What are the highlights of your career so far? And have you traveled and if so, where and where would you go if you can get a gig?

Wow that’s a tough one. I think the highlight of my career in terms of live gigs would either be the event I did with Biz Markie at the House of Blues this past summer in New Orleans, or the event I did at Club Love in DC during the Omega Psi Phi Fraternity’s Centennial Celebration that had George Clinton perform “Atomic Dog,” my fraternity’s unofficial anthem, live. George Clinton was one of my musical heroes growing up in West Virginia, so I felt like a kid in a candy store.

In terms of out of town gigs, I’ve djed in London, the British Virgin Islands and Amsterdam. Domestically, aside from NYC, I’ve djed in Orlando, Los Angeles, Baltimore, DC, Philadelphia, Charlotte, Columbus, Pittsburgh, Alexandria, Atlanta and Birmingham just to name a few.

Where did the whole “Superhero DJ” theme come from?

As a kid, I’ve always been fascinated by Superheroes. Collected comic books and the whole nine. The whole idea of living a double life was always such a cool thing to me. Fact is, this is what I’m currently doing. I work with children during the day as an intensive case manager and by night I transform into this turntable rock star character, “Superhero DJ Jon Quick.” My fans and followers seem to really enjoy and have fun with the whole superhero theme.

Is there anything else you’d like to tell us?

Yes actually, Ced! Follow me on twitter @superheroDJ and please download the Superhero DJ App. Its available on iTunes or the Android Market. You can listen to mixes, check out pictures and video from my various events and of course, my itinerary is accessible as well.

Also, if you are ever in the NYC area you can check me out live at The Empire State Building every Friday night at The Empire Room, for Hi-Definition Fridays hosted by Extra’s AJ Calloway.