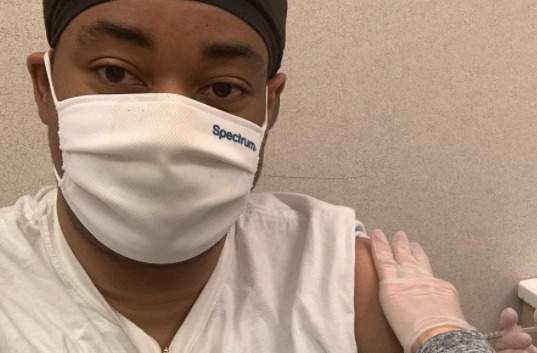 7News reported that local health departments in Maryland and Virginia say that Black men are lagging behind Black women when it comes to getting the COVID-19 vaccine. The story included suggestions from  Fernando Porter of Silver Spring. The physician said that what helps with hesitancy in his Black male patients feeling skeptical about getting the vaccine is sharing his personal vaccine experience with them. Porter explained his arm hurt, chills, body aches, and joint pain followed, but he later felt nothing else. N.C.-based meteorologist Vernon Turner is turning to social media to lead by example for others, too.

“In Virginia alone, Black women are being vaccinated at nearly twice the rate of Black men,” 7News reported.

The Philadelphia Tribune provided comments from Elyn Garrett-Jones. The spokeswoman for the Baltimore County Department of Health remarked that men have not been singled out as a part of an effort to push for communities of color to get vaccinated. In the article, the Rev. Derrick DeWitt of First Mount Calvary Baptist Church in West Baltimore, Maryland, also mentioned his observations in some male congregants.

According to him, an additional challenge is evident because some older Black men recall the Tuskegee Syphilis experiment. The secret study entailed allowing Black men to endure untreated syphilis so the disease could be studied.

The COVID Collaborative partially consists of the nation’s leading experts in public health and education– to end the COVID-19 pandemic.

“About six in 10 Black people age 65 or older would get vaccinated; that falls to four in 10 of those under 40. And 56 percent of Black men would get the vaccine, vs. four in 10 Black women,” The COVID Collaborative reported in research.

The study was conducted to evaluate Coronavirus Vaccination Hesitancy in Black and Latinx communities.