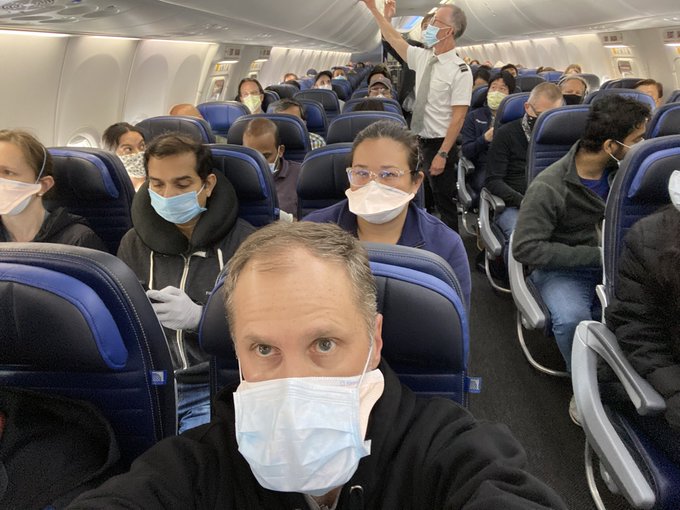 Since April, United Airlines has been providing free round-trip flights to New York City for medical volunteers who want to help fight against the coronavirus outbreak.

Now, as health professionals begin to head home, a doctor is upset that the airline has backed out of its promise to leave space on flights.

Every seat on Dr. Weiss’s flight was filled leaving doctors and nurses scared and nervous about the possibility of infection.

“This is the last time I’ll be flying for a very long time,” Weiss tweeted yesterday from a crowded United Airlines flight. “People on this plane are scared/shocked.”

Weiss was taken aback by the number of passengers on board since his flight to New York was about 30% of capacity. But Weiss said friends told him flights have been increasing in capacity recently.

“I’ve heard from a lot of people who have been doing these medical trips that the number of passengers on the plane has been increasing pretty steadily over the past month,” he says. “My colleagues who came out a month ago said their flights were completely empty.”

In late April, United announced it would begin blocking the middle seats on all flights in order to promote social distancing. The carrier also said it would take in passengers from back to front and process all seating upgrades in order to space out passengers.

Weiss believes the problem with United was many passengers didn’t expect the flight to be full. Most passengers believed United was still leaving the middle seat open. Additionally, many of the health professionals who came to New York and New Jersey did so on mostly empty flights.

“Most of what happened yesterday was a reaction to the fact that they [United] had been telling everyone that the middle seat was blocked,” Weiss said.

The airline industry as a whole is suffering. In April, all U.S. based airlines were ordered by the Department of Transportation to pay refunds to customers whose flights were canceled as a result of coronavirus. The future doesn’t look much better for customers either. A post-coronavirus world is likely to be one with fewer choices in airlines, flight times, and available routes and markets.