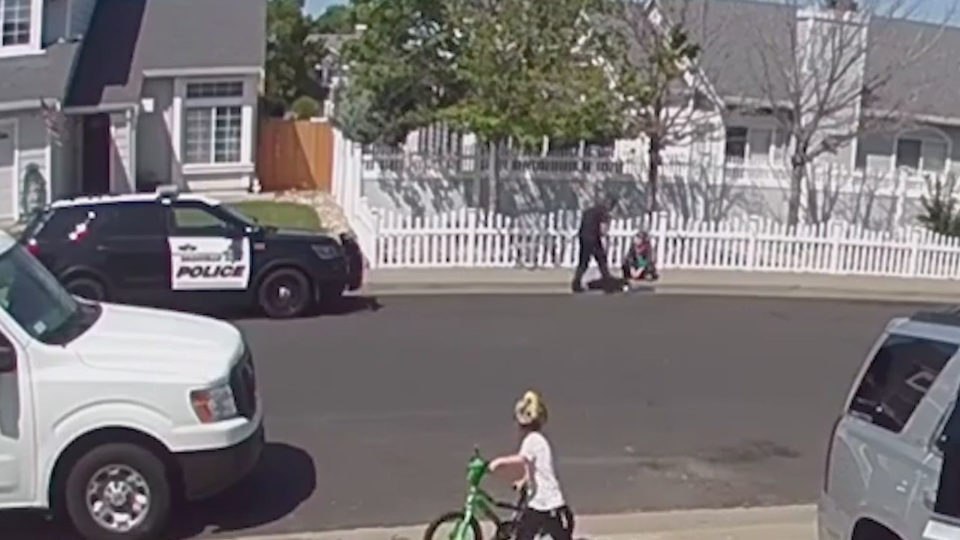 The Vacaville Police Department is doing damage control after shocking surveillance footage showed one of its officers punching an autistic teen.

“Get your hands behind your back!” the officer can be heard shouting at the teen before punching him in the face, KVTU reports. “You’re going to get hurt. Don’t make me hurt you more!” the cop declared as the scuffle ensued. However, the teen he violently arrested was a 17-year-old with autism and ADHD. While the arresting officer didn’t know the teen had special needs, another officer on the dispatch did.

After the surveillance footage was shared on social media, local community members called out the arresting officer’s actions. “It was a very poor decision professionally from that officer,” said Josh Bartholomew, the neighbor whose Ring cameras captured the Wednesday encounter. “The officer had an opportunity to deescalate. He used the discretion to escalate the situation, and it turned out how it was.”

Vacaville Police Sergeant Katie Cardona released a video statement acknowledging the controversy surrounding the video. “We completely understand that the video shown on social media is extremely difficult to watch,” Cardona said. “The arresting officer did not have prior knowledge that the subject was a special-needs individual.”

UPDATE: @VacavillePolice had responded to reports of an assault w/pipe, and the 17yo boy confronted by the officer matched the description of the suspect. Dept has told news outlets the officer involved didn’t know teen has special needs. Another officer not on scene knew pic.twitter.com/LcLbsJfH1O

However, dispatch audio revealed that another officer who was not at the scene was aware and was heard telling the responding officer that the subject “has autism.” The dispatcher responded, “Affirm, possible special needs, per prior contacts.” The officer replied, “Copy, I’m familiar with him.”

But the responding officer was already in the middle of scuffling with the teen. “Fighting with one!” the officer shouted over the radio. The teen was a suspect in a pipe attack incident that left a 16-year-old injured. The teen’s father released a Facebook statement saying, “I am pro-police, but I am not pro-abuse.”