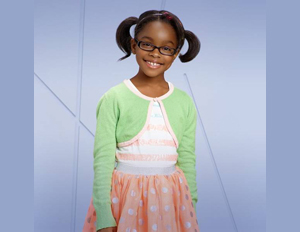 Rarely will you find me frozen in front of a flat screen TV, but when I can catch an episode of ABC’s hit sitcom Black-ish, I break the rules. Let’s just say in between client meetings, media engagements, conference calls and frequent flyer miles, it’s welcomed comedic therapy.

Although I love the synergy of the entire cast, I can’t help but adore Marsai Martin, who plays Diane Johnson, along with her twin brother Jack (Miles Brown). Her role is brilliantly refreshing and brings an intellectual edge that may leave some scholars questioning if they’re really ‘smarter than a 5th grader.’ Marsai may be small in stature but the size of her dreams is larger than life. When asked what she wanted to be when she grows up…”to be a legend.”

Recently, BlackEnterprise.com had a chance to catch up with the little-big dreamer for a chat:

BlackEnterprise.com: What was your first reaction when you received the news that you would be starring in the sitcom, Black-ish?

Martin: I was shocked but really, really excited and proud. It was my very first big job.

When did you realize that you really wanted to pursue a career in acting?

I’ve been acting for as long as I can remember, even before I could talk. So, I didn’t really pursue it. I think it’s what I was made to do.

What are some of your fun and favorite things to do outside of acting?

I love singing, dancing and playing with my Barbie dolls.

What is it like to work with Anthony Anderson, Tracee Ellis Ross, Laurence Fishburne, Miles Brown and the rest of the cast?

We have felt like a real family from day one. Working with them is so much fun. It doesn’t feel like work.

How do you balance school and other activities, in addition to your acting career?

My parents work very hard to make sure that everything is balanced in my life. Work, school, and outside activities are done in a way that there isn’t too much of any one thing. We do school on the set. On my days off, I take karate and get to just relax with my friends and family.

What would you say to those in your age category who desire to pursue an acting career?

Believe in yourself and don’t give up. If you believe it, then you can achieve it. Stay focused and always keep studying your craft.

Who inspire you the most and why?

My mom and dad inspire me the most. They always tell me to step out on faith. They have believed in me from the start. They support me and no matter how big my dreams are, we all work together to make them come true.

Roz A. Gee (@RozAGee) consults as The Media Match Mavenâ„¢ of The Rated Gee Agency (www.RatedGee.com) with service sectors in Media Relations, Brand Readiness and Speaking & Training. Roz has masterfully mixed over 20 years of cumulative experience and has worked professionally for industry titans such as General Electric, AT&T, AOL, IBM, and Northrop Grumman. Schedule a complimentary analysis at www.MediaMatchMaven.com. Twitter: @RozAGee Facebook: https://www.facebook.com/TheRatedGeeAgency