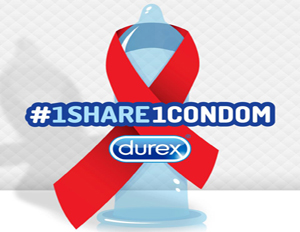 In honor of the 25th anniversary of World AIDS Day, Durex has launched a social media/marketing campaign, #1share1condom, to raise awareness about AIDS prevention. Since the start of the campaign, which began on Monday and runs through Saturday, the condom manufacturer donated over 900,000 condoms.

PCMag.com reports that “Durex has promised to donate one condom for every user who tweets a message about HIV and AIDS using the #1share1condom hashtag.â€ The prophylactic company will also contribute one condom to global and local charities that share its mission of fighting HIV-transmission such as dance4life for every user who shares the Durex World AIDS Day image and video found on the Durex Facebook page.

The goal is to give away 2.5 million condoms – the same number of people infected with HIV last year – by the close of the campaign.