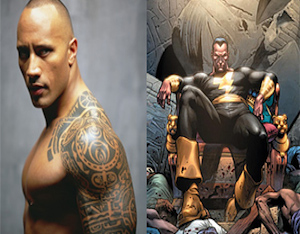 After months of speculation and rumor, Dwayne ‘The Rock’ Johnson finally let the cat–or should we say warrior–out of the bag.

Warner Bros. recently registered a number of web domains that potentially hint at future projects involving DC superheroes. One of the more intriguing pictures was Shazam, a project which Johnson was originally rumored to be a part of.

The hulking wrestler-turned-actor took to his Twitter to announce that he was indeed going to star in the action-adventure picture. “Kneel at his feet or get crushed by his boot,” The Rock tweeted to his millions of follows. With the choice of playing the hero (Shazam) or the villain (Black Adam), it was Dwayne’s “honor” to become the latter, which he describe as an “anti-hero”.

For those outside of the comic world who have no idea who Shazam is, he is a lesser-known DC Comics superhero, who is as powerful as Superman through the abilities of six mythological figures. Black Adam is Shazam’s long-time nemesis, who is in possession of similar powers.

Shazam will be written by Darren Lemke (Turbo) and the idea is that Black Adam will be more of a redeem-worthy character than the one-note villain he’s been portrayed as for years. Warner Bros. is in the process of putting together their own enormous interconnected superhero universe similar to that of competitor Marvel Studios, who continues to rake in blockbuster numbers with their Avengers series.