Dwayne 'The Rock' Johnson Responds In Shock To His Doppelgänger 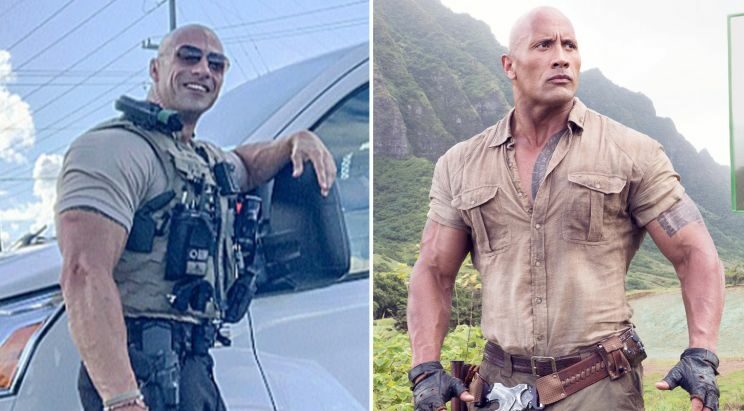 The Rock and his doppleganger

BLACK ENTERPRISE reported on an Alabama deputy who looks exactly like Dwayne “The Rock” Johnson last week.  After seeing a photo of his look-alike, Johnson was stunned by their resemblance and tweeted a response to him on Tuesday.

Above a photo of the two standing side-by-side—both bald and muscular— he said, “Guy on the left is way cooler,” referring to Fields.

Giving a shoutout to his tequila brand, he told Fields “Stay safe brother and thank you for your service. One day we’ll drink @Teremana and I need to hear all your ‘Rock stories’ because I KNOW you got ‘em  #ericfields.”

Oh shit! Wow.
Guy on the left is way cooler.
Stay safe brother and thank you for your service. One day we’ll drink @Teremana and I need to hear all your “Rock stories” because I KNOW you got ‘em 😂😈👊🏾🥃 #ericfields https://t.co/G38tOr68cW

Fields has gained popularity around Morgan County, and now the world, for his startling resemblance to actor and former professional wrestler “The Rock.”

Before he went viral, the deputy paid a surprise visit to a young man working at a local Walmart who wanted to meet him after hearing he favored Johnson.

“I’ve been called The Rock and Vin Diesel’s love child,” Fields said. “I go along with it. It’s humorous. It’s flattering. It could be worse people, I guess.”

He hopes his reputation helps him further connect with people in Morgan County.

Fields, who goes as far as to imitate Johnson when people ask him to, said he enjoys making people happy, but ultimately just plans on being himself.

“I just plan on being me. I’ll cut up. I’m a big cut-up. If it comes up and somebody says that, I’ll play along. I really couldn’t be anybody but me. I’m just glad I could be part of someone’s happiness and laughter.”