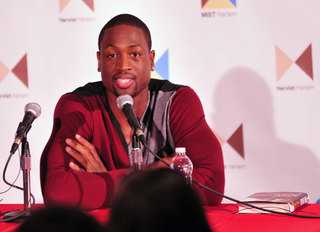 Dwyane Wade is a man of many titles; NBA Champion, Olympic gold medalist, brand endorser and author; but there’s aÂ title that sits atop the list: Dad.

In his newly released memoir A Father First: How My Life Became Bigger Than Basketball, an ever transparent and vulnerable Wade chronicles his tumultuous upbringing and the details of his bitter and very public custody battle for his sons, 10-year-old Zaire and 5-year-old Zion.

Wade won full custody of the children on March 11, 2011. He notes that day as momentous in his life and a driving force for A Father First: “When they came to live with me that day my life changed. Immediately as a single father every decision became about them and I had to put myself last. This was a day that set the foundation for the book, as it was a defining moment for calling myself a father first which went on to become the title of the book.â€

While A Father First is autobiographical in context, Wade’s story is universal in its nature as family, love, rags-to-riches, redemption and forgiveness are themes at the forefront of this vividly painted picture of one the NBA’s most revered stars. In a sit-down interview with BlackEnterprise.com, Wade explained how he managed to remember all of the events detailed in the book.

“I journal often and I had an unbelievable writer who got great things out of me. I would sit there and talk to her for hours. It was therapeutic to go back remember and discuss these things. You don’t realize how you much you remember until you are called to do so and I began to remember everything like it was yesterday. If there were moments I couldn’t remember my mother and sister were apart of the process as well.â€

Wade’s memoir would not have been possible without the support and input of his family and friends and he recognizes that in his acknowledgement section, which is several pages long. He also includes his girlfriend actress Gabrielle Union.

“Thank you for your love and support when I need it most, for your smile that brightens my world, and for your strength,â€ writes Wade about Union. The actress was branded a “home-wrecker” by the press and Wade’s ex-wife, a charge Wade and Union refute.

What’s next for the Dwyane Wade brand?

If A Fathers First and President Barack Obama tapping him to participate in a fatherhood initiative are indicators, we’ll continue to see him lend his voice to uniting families and encouraging fathers’ presence in their children’s lives.

As for other business ventures and creative platforms he said “I’m at a point were so many opportunities have opened because I’m an NBA player and I like to put my foot in all doors and see what sticks for me. I’m not done. I still have a lot more in me to offer to folks. Ultimately, if I can take experiences I go through to help other people, I’ll be happy with that.â€