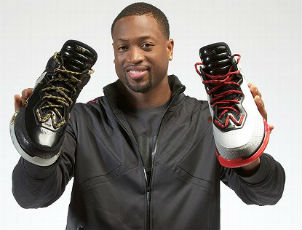 Two-time NBA champion DwyaneÂ Wade is signing with Chinese sportswear provider Li-Ning, which is giving the Miami Heat guard his own brand within the company along with plenty of creative and strategic input.

The partnership will be announced Wednesday in Beijing, where Li-Ning is headquartered and where the Heat are visiting for the NBA China Games tour.

Wade told The Associated Press that he expects the Li-Ning deal to continue through at least the remainder of his playing career.Â Wade wore Converse for his first six seasons, then Jordan Brand for the past three years.

“It was a great nine years, but for me, it was just time to move on,â€Â Wade told the AP. “I have certain goals that I want to reach and I felt that I had to leave to reach those. So I’m doing things a little differently. That’s how I am, in a sense. I’m not necessarily a status-quo type guy.â€

The Importance of Communities, Mentors in Our Youth’s Lives

FacebookTwitterYoutube
← The Importance of Communities, Mentors in Our Youth’s Lives ← Anti-Obama Display Features Watermelons, ‘Go Back to Kenya’ Sign
×
'