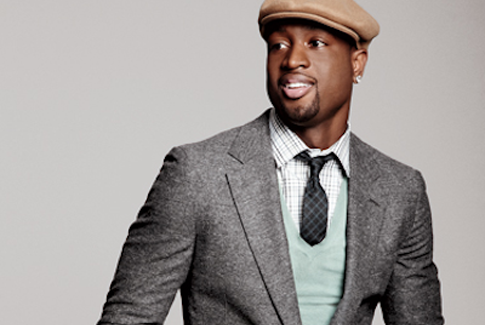 As one of the NBA’s most stylish players, Dwyane Wade is known for his edgy — and sometimes, rather … interesting — fashion.

Now it appears he’s going to take that fashion sense to the boardroom. Wade is partnering with The Tie Bar for a new collection titled “The Gentleman by Dwyane Wade.”

“The Gentleman by Dwyane Wade” collection, which will be a collaboration of Mr. Wade’s personal design team and the Tie Bar designers, will include about 30 bow ties, 15 neckties, 15 pocket squares, tie bars and cufflinks.

The new line will be available online only at TheTieBar.com starting in November, with revenue split between the NBA star and the company.

“Partnering with Dwyane was a no-brainer for us,” said Tie Bar CEO Anand Shah, who joined the company this year after three years as CEO of Chicago-based Threadless. “He is a trailblazer on and off the court, particularly in the way he expresses style.”

The line will be released for sale online in November.

“Style has always been a personal interest of mine,” says Wade. “I already own so many bow ties and ties from The Tie Bar, so I am excited to step into the designer’s seat and create my own line with them.”