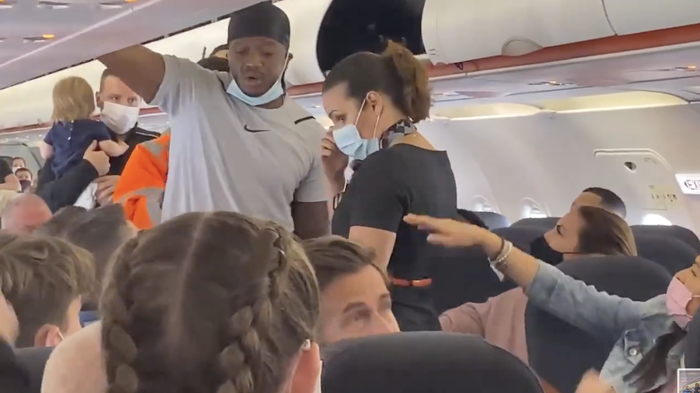 In a surprising tale of solidarity, the passengers on an EasyJet flight from London Gatwick Airport to Spain staged a mutiny against the flight crew. The crew attempted to have two Black travelers removed from the flight for non-compliance but their fellow passengers had their back.

Business Insider reported that the hubbub began when the crew accused the two Black passengers of “huffing” at them when they were asked to put their shoes on prior to takeoff.

Passenger Luke Gayle posted a video of the incident on Twitter.

@easyJet attempting to remove 2 black boys from the flight for huffing at a member of the crew ! Absolutely disgusting. We’ve been delayed 2 hours and counting! Police on board @Gatwick_Airport #gatwick #lgw @SurreyPolice @TheSun #Easyjet pic.twitter.com/hkC3Aa4rb4

“@easyJet attempting to remove 2 black boys from the flight for huffing at a member of the crew! Absolutely disgusting. We’ve been delayed 2 hours and counting! Police on board,” Gayle wrote.

Because the incident took place on the flight’s taxi on the runway, the pilot was forced to turn the plane around. That inconvenience alone cause the EasyJet passengers to become quite vocal about what was happening.

One of the crew members called the police about “disobedient passengers.” This caused four armed officers to board the plane and take the travelers’ passports and luggage. However, many of the travelers can be heard on the video telling the two travelers not to go and to “sit down.”

Their encouragement worked. EasyJet decided to allow the men to remain on the flight and instead replaced the crew.

In a statement, EasyJet claimed that the reason for the crew change was simply because their shift was over. The seemingly trite conflict caused a two-hour delay. A flight from London to Malaga where the plane was headed generally takes about two hours and 45 minutes.

Gayle said he believes race played a part in the crew’s reaction to the incident. However, EasyJet denied that they engage in discrimination and that the safety of their passengers is first priority.

The last famous mutiny was in 1946. However, the actions of these passengers make the case that the practice may be in line for a comeback.