eBay's Diversity Numbers Are As Bad As The Rest

In total, only 7 percent of eBay is black, with only 2 percent of those employees in tech-related positions. (Image credit: eBay)

Popular website eBay’s diversity numbers are out, and they’re just as bad as the rest of the industry.

In a blog post, eBay detailed its efforts to increase its workforce diversity, and highlight the fact that its ratio of female to male employees has improved over the past few years.

(Check out a visual breakdown of numbers below.)

eBay attributes the increase through its Women’s Initiative Network (WIN). “Through WIN, we have more than doubled the number of women in leadership roles and increased the share of leadership positions held by women,” said the company blog post. “And we have continued to expand WIN around the world. Supporting our commitment to women, we also maintain partnerships with the Anita Borg Institute and Lean In.”

In total, eBay’s workforce is 42% female and 58% male, which is an improvement when compared to Microsoft’s or Google’s 28% or 30% female workforce, respectively.

On the ethnic front, however, the company suffers from the same lack of diversity as the rest of the tech industry. Blacks make up 7% of the entire company, but only 2% of its technical jobs. Hispanics also hold 2% of all tech positions at eBay. 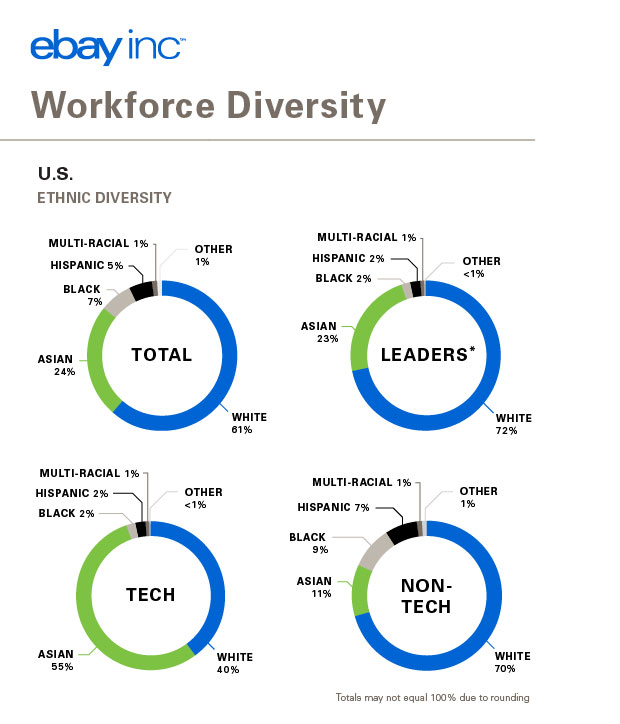 eBay’s commitment to the LGBT community was also discussed in the post. “We are honored to have received a perfect score of 100 percent on the Human Rights Campaign’s Corporate Equality Index (CEI) every year since 2009,” said eBay. “We actively recruit from the LGBT community and we provide progressive benefits.”

eBay’s numbers highlight a growing trend in the tech industry: companies have a dearth of ethnicity at every level. From Google to Facebook, each company seems to share this magic number of 2% for its black employees. 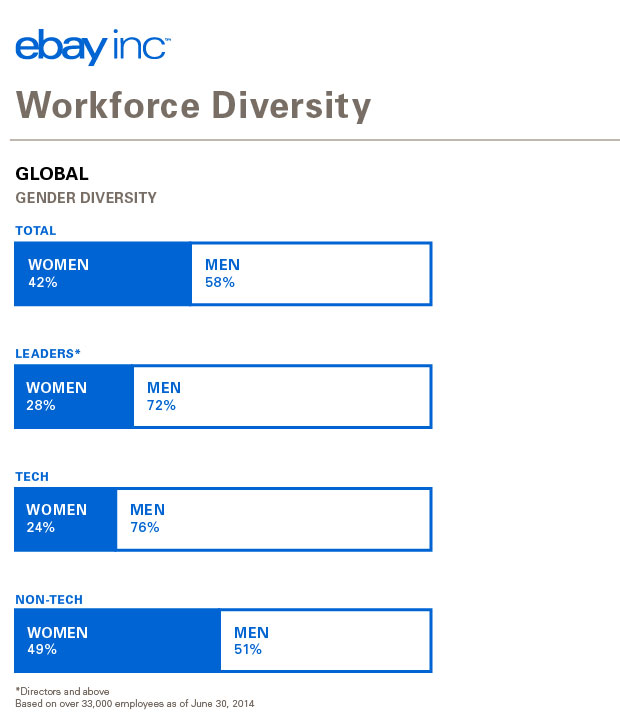