Yes, even I am haunted by the wretched specter of student loan debt. While I was fortunate enough to ensure my nearly $20,000 in student loans were all from the government, I have many friends who aren’t nearly as fortunate. If you’ve followed my blog you know I’m on a mission to help students recognize the most cost effective way to get through school without becoming saddled with debt. Companies have been springing up offering a micro lending model to student loans which aims to make borrowing easier and more affordable.

On Friday, NPR aired an interview with Noga Leviner, general manager of Lumni Inc. USA, an organization which lends students up to $6,000 a year to help finance their education. In turn, students commit to repay a fixed percentage of their income at the time the contract is signed. The percentage is paid for a set amount of time, which Leviner says is typically 120 months or 10 years after they graduate. Once those 10 years are up, regardless if the loan is repaid or not, your obligation to repay that loan is terminated.

“With the financing that Lumni offers,â€ said Leviner, “students basically know that they’re always going to be able to make their payments and that the monthly payment that they owe will really just adjust according to their mean at that particular time.â€

What happens if a graduate is jobless or quits the workforce to head to graduate school?Â  “5% of salary of zero dollars of earnings is obviously zero,â€ says Leviner.

But Lumni is just one of many companies applying a social lending model for college students. I found one article in a Boston University publication focusing on a student who received $30 after making a plea on SponsorMyDegree.com, a site that matches students with businesses and individuals willing to donate.

The piece mentions several other companies adopting their own version of peer-to-peer student lending, including, GreenNote, Fynanz, GradeFund, and Prosper. Even business mogul, Richard Branson is getting in on social lending with his Virgin Money. The program sets up a formalized process for friends and family to borrow from one another. For a $99 setup fee, participants receive a Promissory Note and online loan set up.

With default rates at record highs and tuition rates rising even higher, these new methods of borrowing will hopefully make getting through college less burdensome on students. Additionally, as these options gain traction,major students lenders will be forced to revise their dubious lending practices as competition will now be apart of the game. 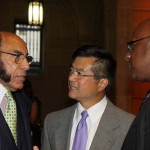